On Tuesday’s episode of The View, Whoopi Goldberg shared her thoughts on the new Maya Angelou quarter.

The first coin in the American Women Quarters Program has been shipped, and it features poet and activist Dr. Maya Angelou, theGrio previously reported. She is the first Black woman to appear on the coin, but Goldberg would have liked to see her image on currency of higher value.

“I want to point out that not too long ago, we were expecting to have Harriet Tubman gracing the $20 bill. Remember that?” Goldberg said on Tuesday morning’s show. “But now it looks like the price has been slashed to a quarter, because now we have Maya Angelou on a quarter.”

Tubman died in 1913 and was known for her forging of the Underground Railroad and helping slaves escape to freedom in the north from southern plantations. She was also a nurse and spy for the Union Army during the Civil War and known for her work for women’s suffrage, theGrio reported.

The decision to place her on the bill came under former Treasury Secretary Jack Lew after a 10-month process in which the department collected input from the American public about who they’d like to see honored.

Former President Donald Trump shelved the Tubman bill after complaining that putting her on the $20 dollar bill was “pure political correctness” and proposed her portrait instead be put on the less frequently used and circulated $2 bill.

Meanwhile, Angelou’s tributary quarter was designed by Emily Damstra, an artist in the Mint Artistic Infusion Program, and was sculpted by Craig A. Campbell, a medallic artist for the U.S. Mint. The quarter depicts Angelou with her arms outstretched and uplifted; behind her is a bird in flight and a rising sun. According to the Mint, the images are meant to symbolize the way she lived her life and are inspired by her poetry.

“It is my honor to present our Nation’s first circulating coins dedicated to celebrating American women and their contributions to American history,” said Mint Deputy Director Ventris C. Gibson in a statement. “Each 2022 quarter is designed to reflect the breadth and depth of accomplishments being celebrated throughout this historic coin program. Maya Angelou, featured on the reverse of this first coin in the series, used words to inspire and uplift.”

Other women who are scheduled to be featured as part of the American Women Quarters Program include Chinese film star, Anna May Wong, and the first American woman to fly in space, Sally Ride. 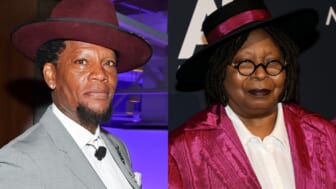 “She is exactly the type of leader I had in mind when Senator (Deb) Fischer (R-NE), Representative (Barbara) Lee (D-Calif), and I wrote our bipartisan legislation to create a series of quarters honoring the contributions of American women. This coin will ensure generations of Americans learn about Maya Angelou’s books and poetry that spoke to the lived experience of Black women.”

In 2010, Angelou was presented with the Presidential Medal of Freedom, the highest honor in the U.S., by then-President Barack Obama.