The Biden White House is looking to extend the federal ban on no-knock warrant restrictions on federal agents amid outcry over the shooting death of Amir Locke.

Psaki made it clear that these actions are “limited to federal agents,” such as the FBI, Drug Enforcement Administration, U.S. Marshals Service and Bureau of Alcohol, Tobacco, Firearms and Explosives, and is not extended to local law enforcement officers.

The U.S. Department of Justice announced last September an updated policy to no-knock entries, limiting its use to “situations where an agent has reasonable grounds to believe that knocking and announcing the agent’s presence would create an imminent threat of physical violence to the agent and/or another person.”

Any expansion of this policy would extend to other federal agencies, such as Homeland Security. Simultaneously, the Minneapolis City Council, while limited in its oversight power of police, held a hearing on Monday demanding a policy review on a possible ban of no-knock warrants following Locke’s death.

A SWAT team entered the apartment where Locke was sleeping on a sofa without announcing themselves. Locke then drew his gun and was fatally shot within seconds of officers entering. There has been national outrage over the no-knock warrant execution as, according to Locke’s family attorney Ben Crump, his name was not on the warrant.

U.S. Congresswoman Cori Bush of Missouri said Locke was “murdered” by police and recalled another high-profile police-involved shooting victim, Breonna Taylor, who was killed by police in 2020 while they executed a no-knock warrant at her Louisville, Kentucky apartment.

At Monday’s press briefing White House Press Secretary Psaki said, “We mourn the tragic death of Amir Locke and our thoughts and prayers are with his family.”

Psaki was prepared for questions, saying “I asked a little bit about this this morning,” on Locke’s death as it has been highly publicized in the media. 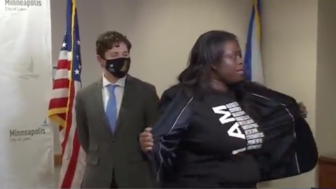 At the same time, Biden administration officials are working on police reform executive orders to compensate for the lack of passage of the George Floyd Justice in Policing Act by lawmakers on Capitol Hill.

In remarks made to the press on Tuesday on Capitol Hill, Congresswoman Bush, who told theGrio she does not support breaking the Floyd bill into smaller components, said that when it comes to legislation on policing her focus is on saving lives.

“When we look at no-knock warrants…like if this legislation isn’t directly tied to how these people could have lived then we’re going down the wrong road.”

In the midst of this national policing crisis that has historically impacted the Black community throughout decades, Psaki said, “The president is committed to ensuring fair, impartial and effective policing and keeping our communities safe. These goals go hand in hand and are, in his view, with what we can achieve by building trust between the police and communities they serve.”

From the White House podium Psaki acknowledged, “We have been engaging with, as you know, civil rights groups. A number of law enforcement groups all agree on the need to reform the use of no-knock warrants. There’s a lot of agreement on that to keep both citizens and law enforcement officers safe.

She added, “the president is examining the possibility of extending those restrictions to other federal agencies through executive actions that he would have the power to do.”

Members of the civil rights community are outraged over the lack of protections when it comes to bad and deadly policing.

Addressing this issue of no-knock warrants and safe policing through federal policy is said to be important to the Biden White House. “We want to make sure we do any action through the administration in the right way, and it’s thorough. But certainly that’s part of what’s being looked at,” said Psaki.

James Burch, president of the National Police Foundation, tells theGrio that he welcomes a new review of no-knock warrants.

“Though not a new tactic, the use of no-knock warrants has reportedly become more common and is generally thought of as a way of reducing risks to officers by limiting a person’s ability to prepare. While the tactic has almost certainly reduced risks for officers, the risks to others and the numerous tragic outcomes should have led to a re-examination of the practice and the frequency of its use long before now,” said Burch.

“As some in Congress signal new interest in examining this issue, we urge an immediate, critical and full examination of the policy, to include the supervisory and judicial controls, risk management requirements, the scope and extent of past and current use, a review of alternative approaches, and a thorough assessment of the risks posed to all persons and officers who may be or become involved in “no-knock” and similar warrants.”