Kevin Hart claimed credit for the delivered prank a few hours after Cannon posted an Instagram message about receiving it.

Talk show host Nick Cannon said that the prank vending machine full of Magnum condoms that he received last week caused some drama in his family.

As previously reported, Cannon got the humorous gag gift for this year’s Valentine’s Day.

“Looks like somebody just sent me an early Valentine’s Day gift!! Vending Machine full of Magnums,” Cannon wrote Monday in the caption of the photo he posted of himself standing next to the machine. The condom-filled apparatus — which arrived days after he announced model Brie Tiesi was pregnant with his eighth child — had a big red bow on top.

Comedian Kevin Hart claimed credit for the prank a few hours after Cannon posted it on social media.

Cannon told Kevin Frazier of Entertainment Tonight that the pair has an ongoing prank war. He suggested that his own stunt — wrapping Hart’s face on Cannon’s private plane — is a “better” joke.

“Vending machine full of condoms is a much bigger hassle to get out of a dressing room and takes up all the space,” Hart chimed in. 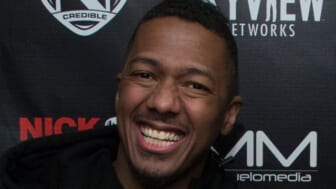 “And one thing that was brilliant about it, it was the mystery of it, because I had up some baby mama drama. ‘Who sent you that? Who sent you that?'” Cannon said. “So, I did have to do some real-life stuff, and then when he came out and said it was him, everybody relaxed.”

“It’s about complicating a person’s day. How do I make your day difficult? That’s a beautiful prank,” Hart added of the stunt.

The two stars were doing press for the return of their show, The Real Husbands of Hollywood, which returned Thursday to BET+ after a nine-year absence. The now-streaming spoof reality series also features rapper Nelly, Boris Kodjoe and a recurring cast of others.