Rapper Marshall Mathers has not yet released an official statement on why he made the gesture — but the NFL said it was "aware."

It was rumored that the demonstration was in solidarity with exiled ex-NFL quarterback Colin Kaepernick, who, in 2016, began kneeling on the sidelines while the national anthem played as a silent protest against racial injustice and police violence. Eminem himself kneeled down after performing “Lose Yourself,” the Academy Award-winning theme from his hit 2002 film 8 Mile, as part of the hip-hop halftime show, which also featured Dr. Dre, Snoop Dogg, Kendrick Lamar, Mary J. Blige and 50 Cent. Playing drums aside Em was Anderson .Paak.

Marshall Mathers, which is the rapper’s given name, has not released an official statement on why he made the gesture — but the NFL has had its say.

“We watched all elements of the show during multiple rehearsals this week and were aware that Eminem was going to do that,” NFL spokesman Brian McCarthy told USA Today Sunday night. “A player or coach could have taken a knee and there would have been no repercussions, so there was no reason to tell an artist she or he could not do so.”

Fans on social media have had mixed responses to the gesture.

“Eminem taking a knee, as presumably a show of solidarity with Kaepernick, while performing in the Super Bowl, for the league that Blackballed him, in a concert likely orchestrated by someone many say backstabbed him, ain’t the ‘rebellious’ act folks are making it seem to be,” one wrote on Twitter.

“the more I think about this ‘the NFL didn’t want Eminem to kneel or Dr. Dre to mention the police’ story the more I feel like that’s exactly the type of story you put out to make it seem like you’re doing something subversive instead of just shilling for an anti-Black org,” tweeted journalist David Dennis, Jr. 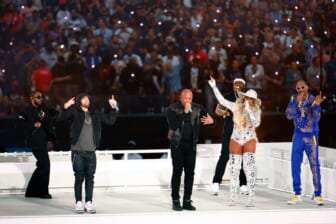 “NFL: Don’t take a knee, Eminem. Eminem: So you want me to definitely, 100%, absolutely take a knee? Got it,” added comedian/producer W. Kamau Bell.

Sports journalist Jemele Hill opined that the rapper’s silence is confusing, tweeting, “For the record, I think I know why Eminem was kneeling, but if it’s related to Colin Kaepernick, he should say that. Not a criticism. But would be a powerful addition to the conversation.”