Eminem took a knee after his performance during the halftime show

Hip-hop and rap took center the stage on Sunday at the SoFi Stadium in Inglewood, California, where the Cincinnati Bengals took on the Los Angeles Rams. It’s the first time the genre has had the stage all to itself instead of being relegated to a “featured guest” spot.

Lamar, Dre, and Snoop are all California natives — a bond to which they paid homage during the nostalgic production.

Dr. Dre and Snoop Dogg kicked off the highly-anticipated extravaganza with their classic song “The Next Episode,” which was rapped in a makeshift Tams Burger joint. Snoop crip walked through his performance — quite possibly a first at the Super Bowl. 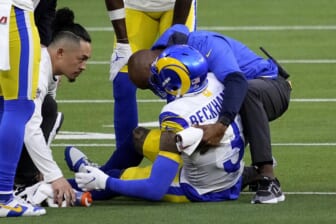 Dre then continued with “California Love,” his hit with the late Tupac.

50 Cent surprised fans and the audience watching at home by appearing on stage in a club setting. He dangled upside down first and then rapped “In Da Club” from his 2003 debut studio album Get Rich or Die Tryin.

Blige, dressed in a white and sparkling outfit and thigh-high boots, then had the mic passed to her. As is her signature style, she took everyone to church with “Family Affair” and “No More Drama,” as a troop of female dancers took their lead from her.

Lamar, in all Black and some gold, kept up the “Dr. Dre” theme and was accompanied by dancers who had the phrase “Dre Day” attached to sashes they were wearing. The California native then rapped “Alright,” while his dancers performed intricate choreography.

It was then Eminem’s turn. He started his performance with “Forget About Dre” and segued into his Oscar award-winning hit “Lose Yourself” from the movie 8 Mile as Dre played on the piano. Eminem took a knee once it was over.

“Still D.R.E.” closed out the Super Bowl 56 halftime show as the uber-producer was joined by all the performers and dancers dressed in khaki to mimic the incarcerated. 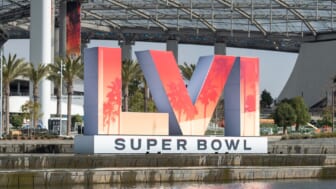 Gospel powerhouse duo Mary Mary began the night’s festivities with their rendition of the Black National Anthem, “Lift Every Voice and Sing” outside the stadium in matching sparkling blue outfits. It was then Jhené Aiko’s turn to wow as she belted “America the Beautiful” inside SoFi stadium while wearing a sequined gown. Her performance was accompanied by a harpist and images of U.S. soldiers around the world.

Four-time Grammy nominee and country sensation Mickey Guyton similarly mesmerized the crowd at the SoFi Stadium ahead of the big game. In a royal blue dress, she belted a stirring rendition of the national anthem. Guyton was backed by a choir which helped illuminated her vocals.

Her performance drew kudos on social media, including from Academy Award-winner Halle Berry who kicked off Super Bowl LVI with an intro video.