The conviction of a former North Miami police officer who shot an autistic man’s caretaker in a 2016 incident that enraged many Americans and sparked early calls for justice, has been overturned, according to CNN.

South Florida’s Third District Court of Appeal overturned the conviction of misdemeanor culpable negligence after determining that prosecutors did not allow testimony from the SWAT commander who trained former officer Jonathan Aledda.

The Florida State Attorney said the decision was “disappointing,” and may seek a new hearing.

Aledda was one of 13 officers who responded to a call about a man with a gun. When they arrived, they found Arnoldo Rios-Soto, who was 27 at the time, and his caretaker, Charles Kinsey. The two were in the middle of the street where Kinsey was trying to help Rios-Soto stabilize after a mental episode. Rios-Soto has severe developmental disabilities.

Photos from the incident went viral with Rios-Soto sitting in the street and Kinsey eventually lying on his back with his arms stretched above his head. Rios-Soto was playing with a toy that some officers said looked like a gun. 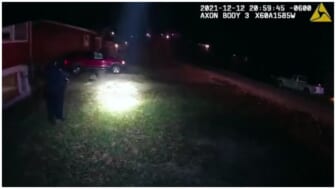 Despite Kinsey’s pleas that Rios-Soto was disabled and that he was his caregiver, Aledda shot at the younger man three times, but missed, hitting Kinsey once in what his attorneys said he thought was a hostage situation.

“All he has is a toy truck in his hands. A toy truck,” Kinsey said in the video. “I am a behavior tech at a group home.”

Aledda was later convicted of misdemeanor culpable negligence. He was released from probation after four months, had to do 100 hours of community service, and had to write a 2,500-word essay about the importance of proper communication between officers arriving on the scene when the situation is not consistent with the information provided over the police radio.

He also had to write about “the difference in physiological response between shooting at human silhouettes at the range and shooting at a living person and its implications for accuracy at distances over 100 feet,” according to the Miami New Times, which published the essay in its entirety.

Kinsey, who was shot in the hip during the incident, reached an undisclosed settlement in a federal suit against the department.