The rapper is expecting a baby with her girlfriend Jesseca Dupart

It’s no secret that actress LisaRaye McCoy has a rocky relationship with her sister Da Brat, and she reminded fans as much during a new interview on the podcast It’s Tricky with Raquel Harper.

McCoy kept it all the way real when she revealed that she found out through social media that the rapper is expecting a baby with her girlfriend, Kaleidoscope Hair Studio founder Jesseca Dupart, also known as BB Judy. As previously reported by theGrio, the couple made the announcement in a joint message on their Instagram pages last month.

The message included pics of Brat holding Dupart’s stomach while folding her hands in the shape of a heart.

“We are EXTENDING the family,” the couple wrote along with an emoji of a pregnant woman. 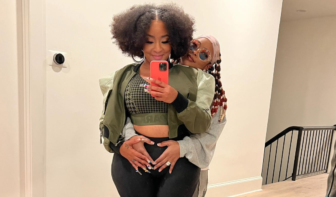 As reported by TMZ, when Harper asked how she felt about Brat having a baby, a visibly upset McCoy dropped a one-word response, “Wonderful,” she said.

The last time the sisters were publicly together was in 2020 when McCoy was celebrating her 53rd birthday on her Fox Soul show, Cocktails with Queens, and Da Brat made a surprise appearance, theGrio reported. The moment was anything but joyous as the segment ended with McCoy condemning the hip-hop star for going months without speaking to her.

“Punk, you know how much I love you. You know how much you mean to me,” said Da Brat to McCoy. The two women share the same father. “You know since I was a child you’ve always been there. You always gave me good advice.”

The moment also marked the first time McCoy publicly reacted to her sister coming out earlier that year and confirming her same-sex relationship with Dupart.

McCoy told her, “I will say this, I am happy for you. I am glad that you are living in your truth. … For you to be so happy and so vibrant, that is a blessing. I appreciate you coming out and verbally saying happy birthday to me in this kind of way, because I (expletive) sho’ ain’t heard from you in months.” 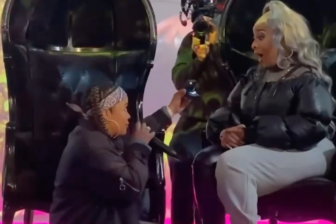 Two weeks after Brat and Dupart revealed they are expecting their first child together, the 47-year-old Chicago rapper proposed to her longtime partner during DuPart’s 40th birthday party.