“We haven’t had the narrative we need for immigration,” Sen. Ben Cardin tells theGrio. “The communities that are directly impacted should be able to have their voices heard.”

As Democratic lawmakers speak out against “inhumane treatment” of Black migrants at the southern border, senators from both sides remain divided on why Black people are underrepresented in immigration policy discussions, and how current policies are contributing to high rates of deportation and expulsion of Black immigrants.

“We haven’t had the narrative we need for immigration,” Sen. Ben Cardin (D-Md.) told theGrio. “The communities that are directly impacted should be able to have their voices heard in developing the right immigration policy in this country. And quite frankly, we haven’t had that debate.”

Black people make up a little over 5% of unauthorized immigrants in the U.S. but over 10% of immigrants in the removal process, according to a joint letter addressed to President Joe Biden by several Democratic lawmakers such as Senator Cory Booker (D-N.J.) and U.S. Rep. Cori Bush (D-Mo.) on Wednesday condemning the harms against Black migrants.

“I think that a lot of folks if you mention immigration, they’re going to have a picture of a person and it might not be a Haitian or of somebody from Africa, they’re going to think immediately somebody from Latin America,” said Sen. Tim Kaine (D-Va.) to theGrio. “Now there’s a lot of African Americans in Latin America, but I think it’s important if we talk about immigration for us to think broadly. So, I think that that’s helpful to educate all of us so that we are thinking about it across the spectrum.”

On this Black Immigrant Advocacy Day of Action, several Black immigration groups like UndocuBlack Network and Congressional Democrats led by Sen. Booker and Rep. Bush have been united on one common idea: Black migrants are suffering at the border. Title 42, which is part of a U.S. health code that gives the government the power to reign in immigration during a public health emergency, is a big reason why. 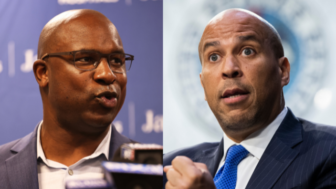 “The use of Title 42 deprives legitimate asylum seekers of their legal right to seek asylum and pursue their claims in the U.S., and its extended use has created unsafe conditions for vulnerable migrants, increased the number of dangerous border crossings and has prevented the Biden Administration from fulfilling its early commitment to restore access to asylum,” said Sen. Bob Menendez (D-N.J.), a signatory of the letter to Biden, in a statement to theGrio.

Former President Donald Trump used the code in a public health order that allowed the rapid expulsion of migrants due to concerns of spreading COVID-19. The American Immigration Council argues that this policy blocks asylum applicants from pleading their case when they enter the country.

Title 42 also made headlines after thousands of Haitian asylum applicants who crossed the southern border were expelled from the U.S. for the same reason.

“The Haitians that have been coming to the United States have largely been coming from South America. Not from Haiti,” said Kaine. “We shouldn’t be returning them to Haiti. If they left Haiti, if there’s any return it shouldn’t be back to a place they voluntarily left. We don’t do that with other people.”

When asked about Black immigrants and the impact of immigration policy narratives on their treatment, Sen. Chuck Grassley (R-Iowa) told theGrio, “What does our immigration issue have to do with African Americans?”

Many GOP leaders, including Grassley, agreed that migrants entering illegally are part of a larger problem of increasing border crossings under the Biden administration. “You can’t encourage them to break the law and the president’s doing that and that’s all,” said Grassley. 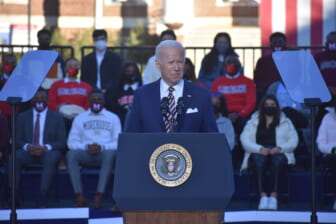 “Well, I think they ought to go back home,” said Sen. Richard Shelby (R-Ala.) when asked about Title 42 and Haitian immigrants crossing the southern border. “They shouldn’t be here, they shouldn’t be coming illegally. But you don’t want anyone to suffer. At the same time, I don’t think we should have open arms to receive them either because they’re breaking the law to get here.”

Sen. Josh Hawley (R-Mo.) echoed these sentiments, focusing on the importance of legal immigration and supporting the continuance of the Title 42 policy.

But with more than 100 lawmakers calling on Biden to reverse harmful practices and help Black migrants receive equal treatment, and advocates mobilizing social media for their cause, the inclusion of Black immigrants, from Haitians to Cameroonians, in policy discussions might be coming to the forefront.

“Immigrants are even more diverse than the rest of the nation and are a key reason our country is as great as it is,” said Sen. Alex Padilla (D-Calif.), who signed the letter to Biden.

Ali Bianco covers immigration and demographics for Medill News Service. The Miami native studies journalism and international studies at Northwestern University and was the politics editor for North by Northwestern, a campus/local reporter for WNUR and an investigative reporter, researching right-wing trends in Miami’s Venezuelan-American community.