Robinson's father was found in Clayton, Missouri, after being pulled over by police for a traffic violation, according to law enforcement.

The father of New York Knicks center Mitchell Robinson III, who was reported missing in Florida on Feb. 11, has been found, according to local authorities.

The Escambia County Sheriff’s Office in Pensacola, Florida, confirmed via Facebook earlier this week that the 23-year-old NBA star’s father, Mitchell Robinson Jr., has been “safely located,” as reported by People. 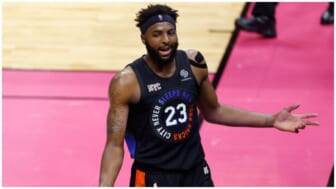 The elder Robinson was found in Clayton, Missouri, early Tuesday morning after being pulled over by local police for a traffic violation, according to TMZ Sports.

Clayton Police officers realized Robinson Jr. was reported missing after running his name through their system, TMZ reported. He was released with a verbal warning.

Robinson III previously reached out to his social media followers for help locating his missing dad.

“Daddy I hope you see this I just want you to come home your grand baby and I can’t go on with out you,” the young NBA star wrote in a since-deleted Facebook post, as theGrio reported previously. “I’m sorry pops we had our ups and downs and it was mostly my fault I should’ve been a man of understanding.”

Robinson III retweeted a Pensacola News-Journal article Friday afternoon about his dad being found, but hasn’t made any additional statements on social media about what happened.