Flaky, a brand new drama, is getting ready to drop on VOD later this month. The film is set to come to platforms through Freestyle Digital Media, a digital film distribution division of Allen Media Group/Entertainment Studios, which also owns theGrio. 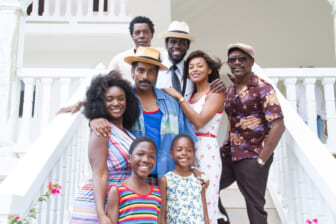 The film stars Tinuke Adetunji as Ibinabo, an immigrant working in New York City at a seafood who is confronted with “loss and betrayal.”

Per the film’s synopsis, “Formerly a renowned track-star in Africa with a master’s degree in sociology, young Nigerian expat, Ibinabo, works at a seafood restaurant in Harlem in order to support her family back home. Working alongside her is her only true friend in the city, Aliyah, a New Yorker born and raised coming to grips with the realities of motherhood and shared custody.

Mimi owns the restaurant, and manages her subordinates with an iron will. When combined, we have a classic case of workplace rock, paper, scissors — as the manager manages the new girl, the new girl bonds with the old-timer, and the old-timer storms out on the manager. During this ordeal, the rhythm of the shop is thrown into jeopardy when Aliyah’s flyboy cousin, Reggie, shows romantic interest in Ibinabo while stopping by one day for a “family discount.” In any other place, this would be a modern fairytale. But New York always has other plans.”

Along with the official press release, creator and director Michael A. Obiazi shared in a statement, “There is no better time to tell a resonating immigrant story than now. Being an immigrant myself and hearing different stories from immigrants pursuing the American dream, my interest was tickled to tell this story influenced by the people around me. Not just telling the story of survival but also addressing stereotypes and social issues affecting Africans living here and the African-American community, in general.”

Check out the official trailer for the film below:

Flaky will be available to rent and own on global digital HD internet, and satellite platforms on March 22.