One of the first murals honoring the memory of George Floyd that was erected in the city where he grew up has been replaced with a work of art called Black Mount Rushmore.

Black Mount Rushmore was created by Reginald C. Adams – a Houston artist, and his team he calls “The Creatives,” who have created several works on the side of The Breakfast Klub restaurant.

“The Creatives,” which includes top painters and artists from the area include Samson Adenugba, Joshua Bennett, Mack Bishop and Charis Kelly. The team has previously adorned the popular establishment located on Travis St. in Houston’s fourth ward with other murals including one of former President Barack Obama and former First Lady Michelle Obama. 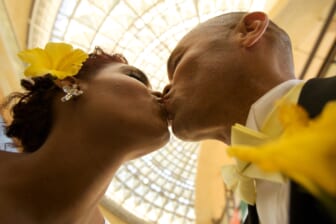 Also Read:
Beyond the broom: 7 ways to bring Black history to the altar

“Black history is more than a month, and we are installing our latest statement to Black excellence, Black culture, leaders and innovators and the geniuses that helped form this country that oftentimes are underserved, overlooked and neglected,” Adams told The Houston Chronicle.

The four men on the mural all lived in the early 20th century and made dynamic contributions to Black life and culture. Jamaican-born Garvey founded the Pan-Africanism movement and encouraged the repatriation of African Americans to the motherland. Woodson is the creator of Black History Week—which later became Black History Month— and he earned a doctorate from Harvard University.

Washington was the first president of Tuskegee Institute which is now Tuskegee University. Du Bois was a writer, sociologist and one of the creators of the NAACP. He was also the first Black person to earn a Ph.D. from Harvard University.

The mural honoring Floyd was erected in June 2020, just weeks after he was murdered by former Minneapolis police officer Derek Chauvin. ABC13 reported that the mural of Floyd represented the anger that the public felt about his death and “the changes that need to take place systemically so that people are not losing their lives at the hand of law enforcement who are sworn to protect and serve, and people are tired and ready to take action for change.”

Adams and his team depicted Floyd with an American flag as a mask. “Ironically, we are in the midst of COVID-19,” Adams said.

“Floyd couldn’t breathe because he had his neck pressured, and the mask he’s wearing now is symbolic of the oppression that has been stifling the voice and the needs of the African American community since we arrived in this country through slavery hundreds of years ago and that’s all coming to light that enough is enough, and we’re not going to take it anymore.”