Benjamin Crump has signed the urgent plea, as has Jasmine Rand, who worked for the families of Trayvon Martin and Michael Brown.

A group of prominent civil rights attorneys said this week they plan to file a global appeal to the United Nations on behalf of Black refugees who may be fleeing the war in Ukraine.

Benjamin Crump, who represented the families of Ahmaud Arbery and George Floyd, has signed the urgent plea, as has Jasmine Rand, who worked on behalf of the families of Trayvon Martin and Michael Brown, according to NBC News.

Peter Herbert, a rare POC judge in Britain, plus Jamaican member of Parliament G. Anthony Hylton, British solicitor Jacqueline McKenzie and Carlos Moore, president of the National Bar Association, have all also signed the appeal. According to NBC, the attorneys announced Wednesday they will file it to the Office of the United Nations High Commissioner for Human Rights and the U.N.’s Committee on the Elimination of Racial Discrimination.

“Such blatant racism cannot be tolerated,” Zita Holbourne, the chairwoman of the Black Activists Rising Against the Cuts U.K., told The Independent. “Human rights of Black and brown people, predominantly students situated in Ukraine, must be honored and safe exit facilitated for all, free of discriminatory selection processes at borders. The targeting of Black and brown people in this way is a racist human rights abuse on top of a human rights crisis impacting all people forced to flee Ukraine.” 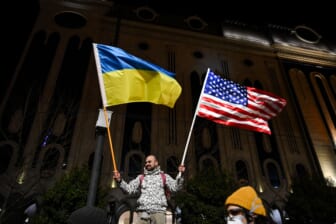 Russia’s ongoing war against Ukraine has presented problems for the thousands of Africans who settled in the targeted Eastern European country. Social media posts from people including Crump have gone viral, showing the Africans being turned away at Ukraine’s border entry into Poland while white families were allowed inside.

Filippo Grandi, the U.N. high commissioner for refugees, “issued statements to Russia about its human rights activities during its attack on Ukraine,” noted Sanders. “And so, it is completely appropriate for that same body to examine what Ukraine is doing, which, while sad, is not surprising because we live in a world that has structures and systemic pieces built up over centuries that make Black and brown people less than.”

Ukraine had become an appealing destination for thousands of higher education students from the western part of Africa. Dammy Raji was studying medicine there when the war erupted, per the NBC report.

She and some friends attempted to evacuate to Poland. They were ultimately granted entry, and Raji said they have been welcomed, due in part to support from social media. 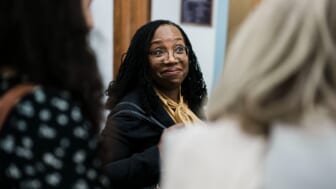 “We took the train because we heard that was easier at the border,” Raji said. “But it was really hard to get onto the train as Blacks. They prioritized their people, especially women and children. … The Ukrainians that want their people to go first.”

“One of those things that struck me was the immediate failure of white people all over the place,” she told the network. “To be in disbelief that racism was happening at the borders … ‘Oh, well, there must be some other reason why they’re holding them back. They’re letting women and children out.’

“I hear that,” Raji continued, “and I say, ‘You’re giving me an invalid excuse because you can’t fess up and come to grips with the reality of the world that you live in and, in part, some of you helped create.”