The rock star and the popular actor are longtime friends, with Momoa married to — and recently split from — Kravitz’s former wife, Lisa Bonet.

Lenny Kravitz and Jason Momoa continue to show the world that blended families can work well. The rocker and the actor have been friends for years, as Momoa has been married to Kravitz’s former wife, Lisa Bonet.

Kravitz shared a picture of the two friends out on motorcycles with the caption, “Ride or die. Brothers for life.” In the pic, they appear to be smiling while holding up vintage bikes. In the comments, Momoa wrote, “Love u bro. Ohana fo life,” with two heart emoji, per People.

Actress Zoë Kravitz, who recently shined as Catwoman in The Batman and took her first turn hosting Saturday Night Live, also commented on the post, writing, “Well isn’t this just adorable. Love you both so much.”

The 33-year-old actress is Kravitz’s only child, while her mother has two more children — son Nakoa-Wolf, 13, and daughter Lola Iolani, 14 — with Momoa. 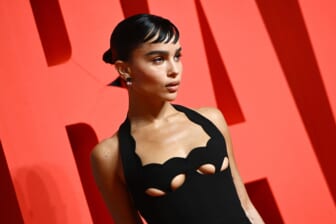 The celebrity couple announced in January that they were ending their marriage, releasing a joint statement, per People, writing: “We have all felt the squeeze and changes of these transformational times… A revolution is unfolding and our family is of no exception… feeling and growing from the seismic shifts occurring,” they shared “And so we share our Family news that we are parting ways in marriage.”

Rumors have been in circulation since then that they had reconsidered their split.

Fans have long praised the blended family for their close friendship.

Entertainment Weekly wrote about the men’s close relationship in 2021, reminding readers of when the then-Aquaman actor bought himself and the “American Woman” crooner matching rings to acknowledge the latter’s support when Momoa hosted Saturday Night Live in late 2018.

Lenny Kravitz’s memoir about the first 25 years of his life, Let Love Rule, was released in late 2021 and hit the New York Times Bestseller list. In it, he writes about growing up bi-racial with his celebrity parents. His mother, Roxie Roker, was a star of The Jeffersons.

He acknowledged his parents recently in celebrating his daughter’s hosting stint on SNL, tweeting, “To see you shine in the same building where your grandparents met and worked was surreal. You were perfection. I love you endlessly.”