President Joe Biden’s Fiscal Year 2023 Budget, released on Monday, entails a lot of proposed government spending for a range of public services to the tune of $5.8 trillion. Some of the issues of various concern to Black Americans found in the president’s budget are policing, crime, voting rights and even marijuana regulation.

If approved and passed by Congress, Biden’s budget would increase funding for police, juxtaposed to calls from the left flank of his party to defund the police. Additionally, there is money for voting rights even as it has failed on Capitol Hill, and Americans continue to vote without the full protections of the 1965 Voting Rights Act that was gutted by the Supreme Court several years ago. 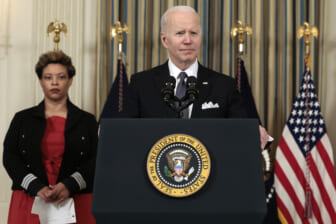 Senator Klobuchar emphasized that despite the Senate’s failed attempt to fast track the Freedom to Vote and John R. Lewis Voting Rights Advancement Acts in January, federal voting rights reform is “not dead.”

“Joe Biden just put $10 billion in the budget to help states pay for things like mail-in ballots. So you might think, well, that won’t happen for a while. Well, it’s also very possible that if we do get to some kind of Democratic-only bill, I’m not going to use the word reconciliation, but… in the next month, we could put voting rights funding in that bill. And that means everything from help to the Justice Department to funding directly for the states,” Klobuchar told theGrio.

The Biden fiscal proposal emphasizes equity, targeting issues of the Black community to include a focus on the escalation of crime across the country. The plan provides $3.2 billion to combat what the White House calls the “gun violence public health epidemic.”  Those discretionary resources are funneled through the Department of Justice for state and local grants.

There is also a mandatory $30 billion earmarked in the budget to increase funding to support law enforcement and crime prevention, including $500 million for community violence intervention programs. The Biden administration believes the funds will help reduce gun-related homicides and address its root causes.

During the president’s most recent State of the Union address, he proclaimed a disdain for the issue of defunding the police, declaring, “We should all agree: The answer is not to Defund the police. The answer is to fund the police with the resources and training they need to protect our communities.” Biden is now following up on that call by requesting investments to fix address violent crime, which disproportionately affects Black and Brown Americans.

Black Lives Matter leaders criticized President Biden’s move in a statement, arguing that the administration is funding policies that have previously failed. “Black people across the country in 2020 were clear in our demand: defund the police to invest in our communities. We won’t let old, dangerous patterns prevail – we will continue our fight for freedom, human dignity and liberation that transforms Black lives, and does not endanger them for the sake of political expediency,” the organization said.

Others are weighing in on the president’s policing budget. Washington, D.C. Mayor Muriel Bowser told theGrio that funding for local policing ensures that the district can hire 350 police officers. “That’s going to be important for how we police locally and First Amendment demonstrations. Like we just saw a truck convoy sit on our city for three weeks. We need to make sure we have the right people in place,” said Bowser.

As Mayor Bowser supports police funding, she is on the opposite side of President Biden on the issue of legalizing marijuana. “We remain disappointed that Republican [budget] riders that prevent the district from regulating and taxing marijuana, which is a big public safety issue for us, remains. So we’re going to keep working with the Congress to get those undemocratic riders revoked,” she told theGrio. 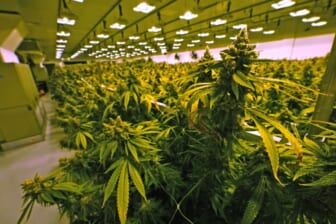 Also Read:
Black participation in the cannabis industry is an uphill battle

“We’re not clear on what the politics are…if it’s just related on trying to get the budget through without making waves at the Congress on these riders. But the bottom line for us is that it impacts our ability to make the sales of marijuana safe and efficient.”

The Democratic-controlled U.S. House of Representatives on Friday voted to legalize marijuana with the MORE Act, or the “Marijuana Opportunity Reinvestment and Expungement Act. The bill would expunge the records of many who were convicted of marijuana offenses and would help ensure that those impacted by the “War on Drugs,” particularly Black and Brown people, can participate in the growing legal cannabis industry. However, it’s unlikely that the MORE Act would pass in an evenly divided Senate.

Meanwhile, Mayor Bowser said she generally supports President Biden’s FY 2023 budget, adding, “The president does a lot of great things that will help crush COVID and help with our comeback.”

The White House has promoted other equity components of President Biden’s budget plan for the upcoming fiscal year, including hundreds of millions of dollars for advancing maternal health and health equity, expanding mental healthcare access, connecting Americans to high speed, affordable and reliable internet, and $1.45 billion for advancing equity and environmental justice.