Tory Lanez was handcuffed in court and taken into custody on Tuesday after violating his protective order in the Megan Thee Stallion shooting case.

As reported by TMZ, the Canadian rapper — whose legal name is Daystar Peterson —appeared at a hearing in Los Angeles where a judge increased his bail and ordered him detained until he posts the $350K bond. Prosecutors requested he be held without bail, or that it be increased to $5 million.

“The DA requested that Mr. Peterson’s bail be revoked or, in the alternative, that it be increased to $5 million. We are pleased that the court rejected those outrageous requests,” the rapper’s attorney, Shawn Holley told Page Six.

TMZ says Lanez is trying to raise the $350K.

A California judge issued a restraining order after Lanez was charged with felony assault for allegedly shooting Megan in her feet in July 2020. Back in August, the judge ordered him to stay away from her, adding specific conditions that he avoids anywhere Megan will be present, theGrio reported. 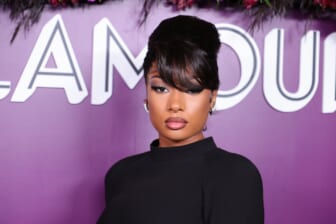 Lanez violated the restraining order when he showed up in Miami at Rolling Loud in July in a surprise appearance during DaBaby’s now-infamous set, which came immediately after Megan performed. Lanez was ordered to pay more money to remain on bail — and warned he’d be jailed if he had any contact with her or mentioned Megan publicly.

Lanez has pleaded not guilty to shooting the rapstress during an argument following a party at Kylie Jenner’s house. His charges include a felony count each of assault with a semiautomatic firearm, personal use of a firearm, and carrying a loaded and unregistered firearm in a vehicle.

On Tuesday, the judge said Lanez was in violation once again for tweeting about the case and he was promptly arrested. The judge noted a specific post in February in which Lanez directly addressed Meg as “U” when he tweeted, “Good d— had me f— 2 best friends … and I got caught … that’s what I apologized for … it’s sick how u Spun it tho …”

Prosecutors also accused Lanez’s legal team of spilling the tea about the case to DJ Akademiks, who in February posted the following message on social media, “BREAKING: It was revealed in court few moments ago that Tory Lanez DNA WAS NOT found on the weapon in the Meg Thee Stallion case.”

Lanez’s attorney has denied tipping off members of the media about details in the case. Holley also clarified that Akademiks’s tweet was wrong as a DNA sample from the gun was inconclusive. 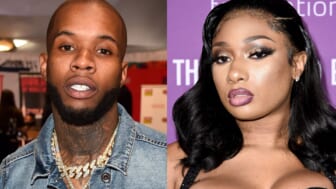 Per Page Six, a source said the judge noted that Lanez has “continued to harass and intimidate” Megan in the media.

“Additionally, the judge found sufficient evidence today that he violated the order of protection and had him handcuffed in the courtroom. The self-serving noise in this case will not change the facts or prevent this case from proceeding.”