In a series of messages posted to Twitter, Bowser said she took an at-home test Wednesday after developing “cold-like” symptoms.

Washington D.C. Mayor Muriel Bowser said Thursday that she tested positive for COVID-19 and would “work at home while following isolation protocols.”

In a series of messages posted to Twitter, Bowser said she took an at-home test Wednesday after developing “cold-like” symptoms. She later confirmed those positive results with a PCR test, which is more precise.

Bowser, 49, was elected Mayor in 2014 and will be running for a third term later this year. Her older sister Mercia died of COVID-19 complications in February 2021 at the age of 64. 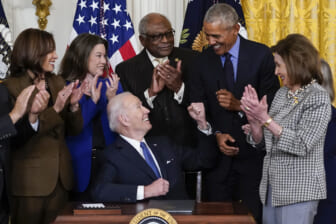 Also Read:
Pelosi positive for COVID-19, was at White House with Biden

Bowser’s office said she did not attend the Gridiron event.

Virus metrics in Washington have crept up in the past month according to most trackers. But they are still far below the recent January peak during the omicron variant surge, and Bowser has lifted most of the District’s COVID restrictions.