The Weeknd is the top finalist at the 2022 Billboard Music Awards for a second year in a row, up for 17 awards, followed by Doja Cat, who is up for 14 awards.

Finalists were announced Friday across 62 categories for the awards that measure chart success, streaming, airplay and social engagement. The show will air on NBC and Peacock on May 15 from Las Vegas.

The Weeknd picked up nods in top artist, top 100 artist and top streaming songs artist and his duet with Ariana Grande on “Save Your Tears (Remix)” is up for six awards. Also nominated for top artist are Doja Cat, Olivia Rodrigo, Taylor Swift and Drake, who is the show’s most decorated winner of all time with 29 total awards.

Doja Cat, who recently won her first Grammy Award for her collaboration “Kiss Me More” with SZA, is up for top 100 song, top collaboration and top viral song. 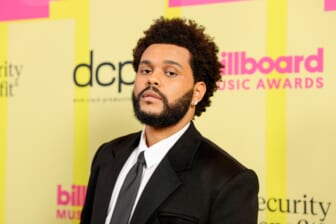 First-time finalist Rodrigo continues her streak of being an awards show favorite as a finalist in 13 categories, including top new artist, top female artist and top radio songs artist.

Justin Bieber also is up for 13 awards, including top male artist, top Hot 100 artist and top streaming song for his song “STAY” with The Kid LAROI.

Swift has a chance to surpass Drake for most wins in the show’s history. The pop star is second behind him with 25 previous wins and is up for seven awards this year. But Drake is also up for 11 awards, including top Billboard 200 Album, top rap artist and top streaming songs artist.

This year, five new categories were added, four of which are based on Billboard’s global charts, and one measuring viral songs. The 2022 awards are based on the chart period of April 10, 2021, through March 26, 2022.