The acclaimed musician was introduced by her mother for a performance of her single "Special."

Superstar musician Lizzo joined an elite class of celebrities to double-feature as host and musical guest on Saturday Night Live this week, sharing a sweet mother-daughter moment amidst a series of standout performances.

The three-time Grammy winner treated audiences to a live rendition of her latest singles “About Damn Time” and “Special,” the title track of her upcoming album, breaking away from SNL’s traditional way of introducing musical guest performers onstage.

As reported by Entertainment Tonight, cast members generally introduce guest musicians when the artist is doubling as host, but as the true original she is, Lizzo teed up her first number herself with an iconic declaration few will ever have the chance to say: “Ladies and Gentlemen, me!”

Making the night even more special, preceding Lizzo’s second performance was a heartwarming intro by her mother, Shari Johnson-Jefferson, who stood proudly before the live New York City audience to announce: “Once again, my daughter, Lizzo!”

In her opening monologue, Lizzo jokingly declared that the “record for the amount of times bitch is said on live TV” would be broken during the episode, noting her previous hesitation to curse in front of her mom when she first saw her perform, Deadline reported.

“I hate cussing in front of my mom,” Lizzo said. “The first time my mom came to see me perform,  I had to warn her: ‘Mom when I’m onstage, I’m gonna say some bad words. At the time, she didn’t like that, but now I’m rich, so she’s like, bitch, cuss me out!” 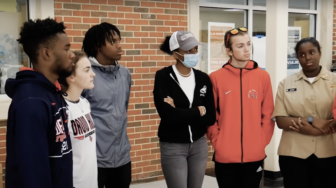 As is customary at any Lizzo performance, the “Truth Hurts” singer used her platform to emphasize the importance of self-love and empowerment to everyone in the crowd and everyone watching at home.

“Everybody should love themselves. You know, at every show I tell my audience the same thing and I’ll tell y’all too — I love you, you are beautiful and you can do anything. I’m living proof of that. I used to live in my car and now I’m up here hosting Saturday Night Live!”

Lizzo’s list of accomplishments has grown in 2022 as the singer recently celebrated the April 12 launch of her new shapewear brand, Yitty, which she promoted by boarding a plane wearing a black Yitty-branded ensemble that bared her buttocks, all posted on Instagram.

Backing the viral video was a snippet from “About Damn Time,” which Lizzo dropped days later on April 14 as the first release from her fourth studio album “Special,” which the singer-songwriter-flautist has reportedly been working on for three years.

Lizzo’s recent hot streak also included the March 25 premier of her new unscripted competition series, Lizzo’s Watch Out for the Big Grrrls, which sees the singer searching for dancers for her upcoming tour.