The iconic point guard has a history with Boston's team. "There's only so much you can take as a competitor," Irving said.

Controversial NBA star Kyrie Irving is in an intense competitive mode for the NBA playoffs.

The Brooklyn Nets point guard flipped off Celtics fans after being heckled during Game 1 of the opening-round playoff series at TD Garden in Boston Sunday night, as reported by Yahoo Sports. He is likely to be fined by the league.

Irving addressed the incident during the postgame press conference. “It’s nothing new when I come into this building what it’s going to be like, but it’s the same energy that they have for me,” Irving said. “I’m going to have the same energy for them. It’s not every fan. I don’t want to attack every fan, every Boston fan.”

“But when people start yelling ‘p****’ and ‘b****’ and ‘f*** you’ and all this stuff, there’s only so much you can take as a competitor. We’re the ones expected to be docile and be humble and take a humble approach. No, f*** that. It’s the playoffs, this is what it is. I know what to expect in here, and I’m giving the same energy back to them.”

“If somebody’s going to call me out on my name, I’m going to look at them straight in the eye and see if they’re really ’bout it,” Irving said to the press after the game. “Most of the time they’re not.” 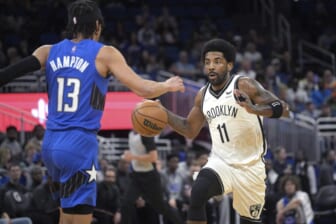 As a former Celtics player, Irving’s history with the team is long. He played with the Boston franchise from 2017-2019, and told fans that he planned to re-sign with the team. However, he changed his mind and ultimately signed with the Brooklyn Nets.

In 2020, Irving famously burned sage around the court at the TD Garden during his first game back in the arena.

After a win during Game 4 of the playoffs that season, Irving stomped on the Celtics logo, Lucky the Leprechaun, and a fan then threw a water bottle at him, as previously reported by Yahoo.

Also Read:
Kyrie Irving is neither a victim nor a hero

Irving noted that there was no “hostility” in his gestures to the fans, adding, “It’s basketball.”

The star point guard famously refused to adhere to vaccine mandates last year, which prevented him from playing a full season at Barclays Center. He missed 35 games. Irving made his season debut in January 2022, when the franchise announced that he would be able to practice at home, travel with the team and participate in road games.