Pennsylvania Gov. Tom Wolf selected Johnson as the fourth person to lead the department since the start of the pandemic.

Pennsylvania Gov. Tom Wolf has selected Dr. Denise Johnson to be the next head of the state’s health department.  She will be the fourth person to lead the department since the start of the coronavirus pandemic.

“The Wolf administration is proud to have had four highly qualified secretaries of health lead the Department of Health through an unprecedented global pandemic and response,” department spokesperson Mark O’Neill told the Philadelphia Inquirer.

The obstetrician, who is also the state’s physician general, will be the first Black woman to lead the Pennsylvania Department of Health.

She will become acting secretary, replacing Keara Klinepeter, who is leaving the post in advance of the birth of her first child.

Johnson takes on the role as the state and many others are reducing their response to the ongoing pandemic. There are currently no mandates in Pennsylvania or restrictions related to coronavirus in the state. The Inquirer notes that the Department of Health is moving to a monthly email update on the virus as opposed to one that went out weekly. Additionally, the state’s online COVID dashboard will be updated weekly instead of daily.

“The pandemic has changed many aspects of public health here in Pennsylvania and nationwide,” Johnson said in a statement. “I am honored to lead the department during this transformative time in public health.” 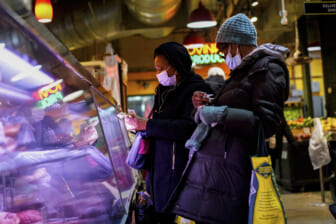 Also Read:
It’s not over: COVID-19 cases are on the rise again in US

According to the Inquirer, Wolf, a Democrat, did not seek to have Klinepeter or her predecessor confirmed by the Republican-controlled state Senate, and probably would not push for Johnson’s confirmation in this election year.

Johnson had previously been the chief medical officer at Meadville Medical Center in Crawford County, and before that she worked in private practice.

Last spring, Johnson helped lead the state’s vaccine rollout by answering questions from the public and debunking misinformation. She frequently appeared at news briefings, vaccine clinics, and other in-person events, specifically those that targeted underserved communities.

According to the report, Johnson plans to focus on health equity, including “long-term efforts to make high-quality health care available for all Pennsylvanians, including minority populations and underserved communities, both in rural and urban areas.”