30 years after the 1992 Los Angeles Rebellion, policing in the city hasn’t changed much

OPINION: The city burned for six days over tensions between Black residents and police. Today, law enforcement in Los Angeles is still viewed with distrust. 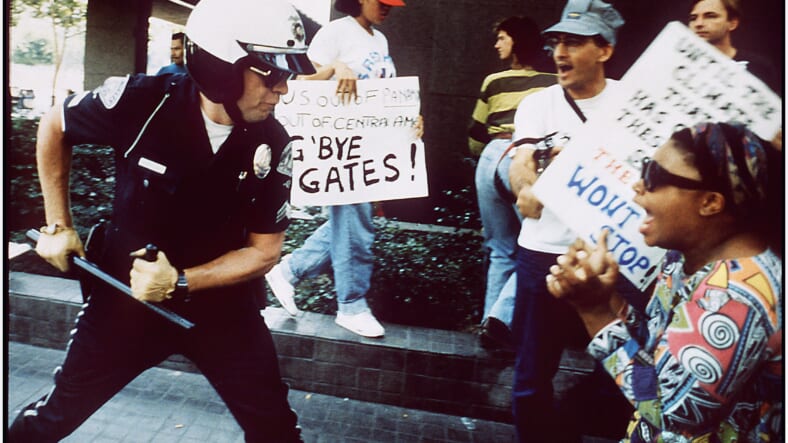 Police officer uses his baton on a protester at the corner of First St. and Broadway (downtown) on April 29, 1992 in Los Angeles, California. (Photo by Kirk McKoy/Los Angeles Times via Getty Images)

It started with the verdict. Four police officers were charged by the state in the beating of unarmed Black motorist Rodney King. Many suspected from the beginning that once the trial’s venue was moved from Los Angeles to nearby Ventura County that there would be no justice.

Simi Valley, where the trial took place, was at the time a lily-white neighborhood where a lot of police officers lived, and that was part of the problem. With a mostly white jury in a cop-friendly town, who was going to say the four officers were wrong for beating a man they suspected of being under the influence? 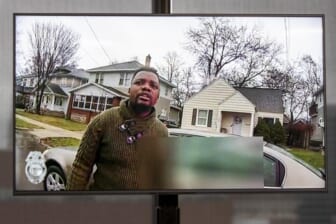 And while the verdict—delivered 30 years ago on April 29, 1992—ignited the eruption in the city, it wasn’t the only flame that needed to be put out.

Two weeks after the beating of Rodney King was captured on amateur video on March 3, 1991, 15-year-old Latasha Harlins was killed by Korean grocer Soon Ja Du over a bottle of orange juice.

Latasha had gone into the Empire Liquor store to purchase the bottle of juice for her grandmother. Once in the store, she put the juice in her backpack and approached the counter to pay for it. Du accused Harlins of trying to steal the juice and grabbed her by her sweater. Harlins fought back, hitting Du twice in the face before backing away from the counter. In the scuffle, the bottle of orange juice fell to the ground. Harlins picked it up, handed it to Du, and turned to walk out of the store. That is when Du reached under the counter, grabbed a gun and shot Harlins in the back of the head. She died instantly, the money for the orange juice still gripped in her hand.

Du was tried for murder and found guilty of voluntary manslaughter, which carried with it a maximum sentence of 16 years, but the judge in the case was sympathetic to Du and gave her what equated to a slap on the wrist: five years probation, 500 hours of community service, $500 in restitution to Latasha’s family, and a ten-year suspended prison sentence. It was egregious, and people were angry.

The combustible combination of anger at the police and frustration with the Korean Americans who were fine to conduct business in the hood but treated the residents of the hood like garbage was too much to bear. The city exploded into civil unrest that lasted six days. Eventually, law enforcement agencies from other cities as well as the National Guard would mobilize to help restore order to the city, but the damage had been done, and some of it was lasting.

There are parts of South Central Los Angeles that have never recovered economically from the damage. Grocery stores and other businesses have moved completely out of the area, creating various food deserts where older residents and those with lower incomes no longer have access to fresh and reasonably priced food.

The relationship between Black residents of the city and Korean-American business owners is still mostly transactional and fraught with tension. There is no “community” where those two groups are concerned; there are simply two groups of people who do business together because their situations and locations demand it.

As far as policing in the city, things have gotten demonstrably worse.

Both the Los Angeles Police Department and the Los Angeles Sheriff’s Department have horrible reputations and track records when it comes to their interactions with the residents of the city. The sheriff’s department, in particular, is known to be filled with internal gangs that target the city’s residents of color. The county sheriff himself is currently embroiled in a scandal in which it is alleged he attempted to cover up a video of a deputy kneeling on a handcuffed inmate’s neck—a case reminiscent of the murder of George Floyd.

LAPD and LASD still beat Black people. But those beatings now often escalate into shootings, and there doesn’t seem to be a remedy in sight.

Although there are more systems in place that theoretically should keep law enforcement in check and hold people accountable (the Police Commission, for instance), that doesn’t seem to deter officers with badges and guns from abusing their power.

The scary part is, although Rodney King was the first televised beating a lot of people saw, it definitely wasn’t the last. With the advent of camera phones, videos of police misconduct have proliferated, not just in Los Angeles but in cities across the country. Distrust of the police is at an all-time high, and new videos of their dirty deeds emerge every week, bringing concern that people may become desensitized to the violence. 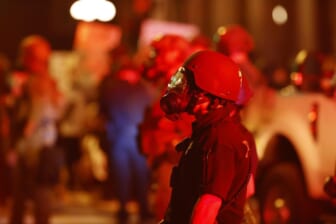 Also Read:
$14M jury award for protesters could resonate around US

There are many who think police should be defunded or outright abolished, but that is not likely to happen anytime soon.

The very origins of police departments, which started as slave patrols—a means of terrorizing Black people into compliance—would lead one to believe that these things are functioning as intended.

And as long as the intention is to inflict harm and terrorize people into complying, nothing will ever change.