A video of a Knoxville, Tennessee private school student in Ku Klux Klan attire yelling the N-word has been met with backlash from the student’s school and state legislators after circulating on social media this week.

Grace Christian Academy said it is “taking appropriate disciplinary steps” with all students involved in the video, which begins as a student dressed in a white hood carrying a wooden staff is being escorted into a room by a classmate as others can be heard laughing in the background, as reported by NBC-affiliated WBIR.

After the robed student is commanded to sit down, an off-camera voice is heard ordering the student in KKK clothing to speak, hollering “who do we hate?” The robed student proceeded to scream the N-word, eliciting laughter from others in the room, per the outlet.

The video was shared on social media on Wednesday. Tony Pointer, head of school at Grace Christian Academy, responded the following day by issuing a statement, according to reports.

“Immediately upon being made aware of an extremely inappropriate and deeply disappointing video yesterday afternoon that violates everything we value, the administration of Grace Christian Academy has taken swift action to meet with all students involved. Severe disciplinary action has been issued as GCA does not condone this behavior or any form of racism,” he said, adding that an investigation was ongoing. 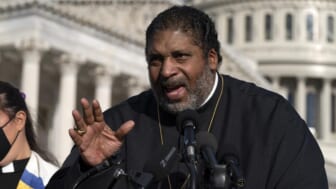 Rep. Gloria Johnson, D-Knoxville, called the video “distressing” in a tweet on Thursday.

“The fact that they were so bold and not even a bit embarrassed about this is just shocking,” Johnson said. “That they felt comfortable sharing it means that they thought everyone else would think it was funny also. Who taught them this?”

In a follow-up tweet, Johnson said that the issue of racism in schools may worsen as public school teachers in Tennessee are facing “threats” from state lawmakers about teaching historical facts regarding race.

As reported by the Associated Press, Black legislators in Tennessee report dismissiveness from white colleagues when attempting to address issues of systemic racism, including the state’s recent ban on “critical race theory” instruction for K-12 students.

“Anything that tells the truth about our history, for whatever reason, their fragility comes into play and it is exposed,” said Rep. Antonio Parkinson, D-Memphis, who also serves as chair of the General Assembly’s Black Caucus, the AP reported.