Kev Marcus and Wil Baptiste, who formed their duo in high school, are back on the road after a Covid pause.

Two Black violinists continue to take the world by storm with their fusion of classical music and hip hop performed as the duo Black Violin. The Atlanta Journal-Constitution shared a profile of Kev Marcus and Wil Baptiste, who make up the duo, as they prepared to go back on the road.

The two started playing together in high school in their native Fort Lauderdale, Florida, where they were inspired by one song in particular, “Gimme Some More,” by Busta Rhymes. They then got a shot at appearing on Showtime at the Apollo, where they won. They caught the attention of one of Alicia Keys’ managers and joined her for a performance at the 2004 Billboard Music Awards.

Their careers grew as they started taking touring gigs, but they maintained their dream to make their own music. Their first album, Black Violin, was released in 2008, followed by two more. Take the Stairs is their fourth project, and Marcus says it is defined by its “authenticity.”

“This is the most authentic album we’ve ever done,” he told the AJC in a phone interview earlier this year. “The album is who we are. That was the best part of it. It didn’t feel like we had to try to conform or act like anything else, and we were still able to make an album that we feel very, very proud about without necessarily compromising our ideas in any way — all without being preachy.”

Marcus and Baptiste (who is also a vocalist) say that Take the Stairs is more classical, but they add that the album also has an R&B-leaning vocal melody sound to broaden their appeal and denote their evolution.

The two built their career with musical fusion and have appeared in commercials, and on television, and they are passionate about supporting kids to pursue the musical arts.

Black Violin performed at the John F. Kennedy Center for the Performing Arts and with the National Symphony Orchestra in commemorating the 50th anniversary of the death of Dr. Martin Luther King Jr., and is currently touring.

According to the Houston Chronicle, the duo played more than 100 shows prior to the coronavirus pandemic. Since then, they have released a Christmas album. 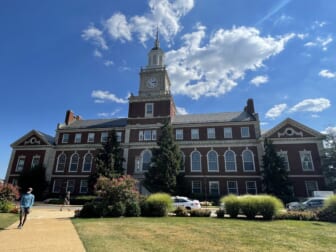 “Our cool stuff to play is ‘Star Wars’ and ‘West Side Story.’ Now with us and the rest they can try more different stuff, to connect,” says Marcus, referencing such similar crossover artists as Lindsey Stirling, Rasputina, and Zoe Keating as acts that have successfully blended modern music with classical. “There is also so much distraction now, so I imagine it’s harder to get good with the instrument. I can’t imagine practicing while also having, like, Instagram. On the other hand, you can become viral in middle school thanks to playing on social media. It’s exciting.”

Marcus told Billboard in 2019 that he is proud of the group’s nearly two-decade career. “Every time I’m playing I have moments where I can’t believe I’m still playing this violin my mom put me into class to learn 30 years ago,” Marcus said. “Half of me is ‘I always knew we could do this’ and the other half is ‘I can’t believe it worked’ — kind of both of those at the same time. It’s been really rewarding, but we feel like there’s a lot more for us to do, too.”