How I became a Black NASCAR fan

OPINION: With more Black team owners than the NFL, NBA and MLB combined and featuring cars emblazoned with the logos of HBCUs, NASCAR is making moves to attract Black fans. 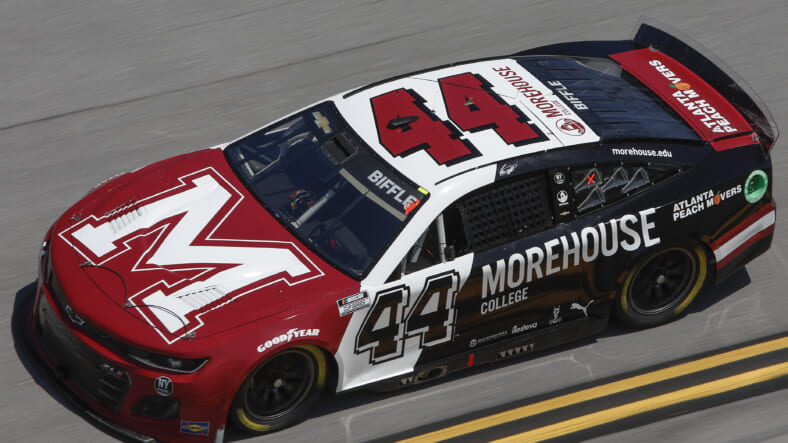 Greg Biffle, driver of the No. 44 Morehouse College Chevrolet, drives during qualifying for the NASCAR Cup Series GEICO 500 at Talladega Superspeedway on April 23, 2022 in Talladega, Alabama. (Photo by Sean Gardner/Getty Images)

The black-and-gold paint scheme immediately caught my eye, like grandfathers’ fraternal bond in the Divine Nine. Even though the school wasn’t HU You-Know, at least another HBCU was center stage in February for one of the nation’s biggest sports events, the Daytona 500.

I typically pay the same attention to that race, “The Super Bowl of NASCAR,” as any other—roughly none. But when the NY Racing Team rolled up in that sweet ride with homages to Grambling State University emblazoned on the hood and doors, looking away was impossible. Learning that team owner John Cohen is a Grambling alum who played for legendary coach Eddie Robinson only increased the intrigue.

That was three months ago, back before I had ever watched a NASCAR race from beginning to end. Since then, I’ve taken the sport for a spin and found it super cool. It’s also way Blacker than imagined, leading to a new favorite Facebook group, deeper interest, growing knowledge, and lingering disbelief.

Shoutout to Cohen, who’s been in the game since 2007. His ongoing partnership with HBCU League Pass has paid off in national TV shine for Norfolk State University, Florida A&M University, Stillman College and Morehouse College. “It’s a way to move the needle on my team and highlight HBCUs,” Cohen said in a phone interview. “We’ve gotten really good feedback, and all the schools are getting a lot of press now.”

I know a lot of Black folks haven’t rocked with NASCAR, understandably so considering its history with good ol’ boys and the confederate flag. But bear with me. There’s reason to reconsider.

Scanning the owners’ suites in major professional sports, we don’t see many raisins in that milk. Michael Jordan is the NBA’s only Black owner. Neither the NFL nor MLB have any, and hockey is hockey. Major League Soccer is booming, but a group shot of ownership resembles the Founding Fathers.

Conversely, NASCAR is trying to diversify its pale and graying fanbase by putting some flavor on top. Cohen is among four Black owners who had cars in the Daytona 500. Fellow Black owners in the race were ex-NBA stars Jordan (23XI Racing) and Brad Daugherty (JTG Daugherty), and boxing legend Floyd Mayweather Jr. (The Money Team Racing).

“NASCAR has actually opened the door for minorities to come in and actually own their teams,” Hall of Fame running back Emmitt Smith told The Shadow League after becoming co-owner of Jesse Iwuji Motorsports. “Ownership is really the key to any type of change you really want to create.” 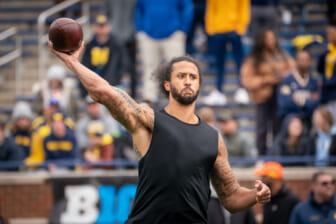 Behind the wheel, two drivers dominate my rooting interests.

Bubba Wallace, who drives for Jordan’s team, is the Black face of racing, all alone at the top level. He deserves our full support, considering the ruckus he raised after George Floyd’s murder. His push helped NASCAR ban the confederate flag. (Later, a noose was found in Wallace’s garage, but the FBI said it was just a pull-down rope to close the door. No other garage had a similar pull-down rope, so we know what’s up. And yes, I highly recommend the Netflix docuseries on Wallace and his reluctant acceptance of activism).

The other brother to watch is Rajah Caruth, perhaps a budding legend at 19 years old. He has displayed amazing progress, starting on racing simulators that earned him a tryout in NASCAR’s Drive for Diversity program. Success on lower tiers led to a six-race deal this year in the Xfinity Series, one level below the top. Though he’s a sophomore at Winston-Salem State University—the only HBCU with a motorsports management program—Caruth’s car repped Virginia State University in his first Xfinity race.

When you stop to think about it, more Black folks in racing totally makes sense. Sort of like the auto show meets homecoming, meets the classic, meets the cookout, meets the track and the casino.

We all know someone who loves to drive crazy fast, tailgating like they’re drafting at Daytona. Cohen got his start in illegal drag races in Newark, N.J. And if I see one more video of people closing off streets and standing ridiculously close while fools spin around doing donuts, I’m gonna slap someone. Take that nonsense to the track.

Besides drivers, we have acquaintances who enjoy getting under the hood, taking engines apart and hopefully putting them back. In addition to mechanics, life on pit row requires levels of speed, strength and agility that has NASCAR recruiting HBCU athletes. (I told you this is Blacker than imagined.) Trying to change tires as fast as possible looks like fun.

This entire three-month ride has been fun.

NASCAR wants more Black fans, and I’m down, especially after seeing owners, drivers and crew members who look like me. Plus the cousins are already in place. We up in here!