The Raiders would be a perfect fit for Kaepernick. But will he get that chance?

OPINION: The NFL would catch less heat by dropping its blackball and killing the storyline. That would be the smart play because Kap shows no signs of going away quietly. 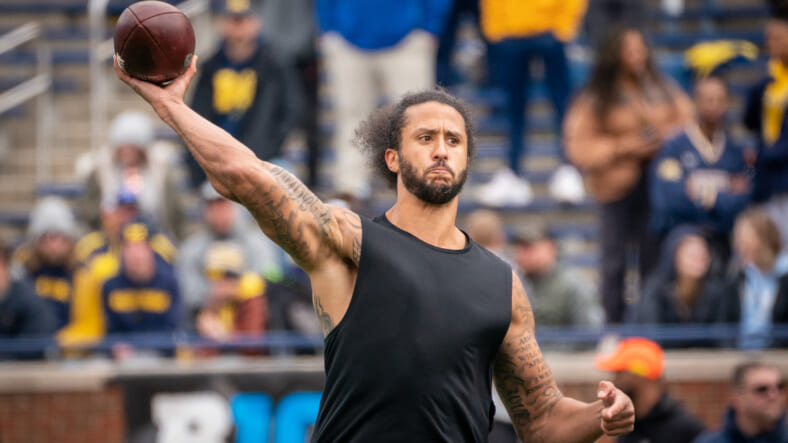 Colin Kaepernick participates in a throwing exhibition during half time of the Michigan spring football game at Michigan Stadium on April 2, 2022 in Ann Arbor, Michigan. (Photo by Jaime Crawford/Getty Images)

In 2017, NFL coach Pete Carroll raved about Colin Kaepernick’s ability to play, but the quarterback has remained unemployed. This week, NFL owner Mark Davis said he’s not opposed to Kaepernick joining the Las Vegas Raiders, but there’s no news yet.

For the trifecta, we just need a general manager who loves him—and doesn’t face pushback from the coach and owner.

“(Kaepernick) deserves every chance in the world to become a quarterback in the National Football League,” Davis told NBC Sports Bay Area. “I still stand by it. If our coaches and general manager want to bring him in or want him to be the quarterback on this team, I would welcome him with open arms.”

The coach is Josh McDaniels, and the general manager is Dave Ziegler, both hired in January. We won’t hold our breath waiting for their assessment, though Kaepernick on the Raiders would make perfect sense.

Props to the Raiders.

Yes, I know. I have friends and maybe family in a strong tribe, Pox on All Them, Period. But consider the satisfying twists and certain stomachs’ turning if Kaepernick lands with Las Vegas.

While former Raiders coach Jon Gruden sues the NFL for anti-racism over his leaked emails. And former Miami coach Brian Flores sues the NFL for racism in its hiring practices. As federal legislators poke the Washington Commanders’ finances and workplace culture. And six state attorneys general look sideways at the league for possibly harassing women and minorities. The only bad actors in this drama are Gruden, Dan Snyder and the NFL.

Yet critics claim Kaepernick would be a distraction. The NFL would catch less heat by dropping its blackball and killing the storyline. That’s the smart play.

Because Kaepernick shows no signs of fading quietly on his own.

He continues to put in the work and show the proof, displayed again recently at the University of Michigan spring game. The man insists he wants an NFL roster spot—even as a backup—and he’s good enough to merit one on multiple teams. If none of them act right, his consolation will be a dope documentary directed by Spike Lee, who’s putting the job hunt on tape.

The Raiders have a bonafide starting QB in Derek Carr and two nothing-specials at backup. Whatever. Kaepernick could’ve been invited to an NFL training camp the last six years if the only considerations related to football. But that hasn’t been the case and his knees during the anthem are the only explanation.

They might not let him in. But it’s going to be loud and noisy until he decides otherwise.

“I can help you win games,” he told NFL teams via WJRT after his performance at Michigan. “…I would love to come in and sit down with you and have that conversation about how I can help you be a better team.”

Before Kaepernick turned up the volume and restated his interest in playing again, part of me wished he would move past football. Forget about them. It’s not like other pursuits are lacking. Besides social justice initiatives, his interests include business, entertainment and education. Sometimes all four, like in his children’s book. 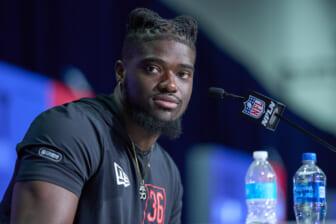 But now I see it differently. I think Kaepernick wins either way.

Sign him or don’t sign him. He could help some team’s problems, but the league’s troubles aren’t going away. He’s got nothing to lose by persisting. Either way, he represents light and disinfectant.

Brian Flores is the same type of agent, brazen enough to believe ability should outweigh activism for a righteous cause. Flores willingly risked his career with a class-action lawsuit, and he’s rightfully viewed as a champion crusader, even as an assistant coach with the Pittsburgh Steelers.

Kaepernick deserves the same ability to work again if he so chooses.

If the league doesn’t choose him back, that’s on them.