Law student Rochelle Ballantyne is on a mission to be the first Black American woman chess master.

“I’ve been trying to get it for the past 10 years,” said Ballantyne, 26, in an interview with Reuters earlier this year. As reported by Spectrum News, Ballantyne is currently ranked an expert by the U.S. Chess Federation, which is one level below master.

Points are earned from tournament play, and Ballantyne plans to earn the 200 points she needs to level up.

“I love being able to think strategically about things, to just like sit and just be with my thoughts and just like figuring out a way to beat you,” she told Spectrum News. “I love winning.  I really love winning.” 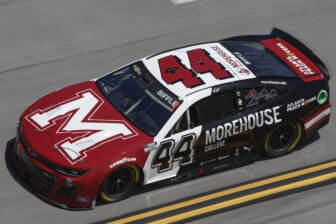 Also Read:
How I became a Black NASCAR fan

Ballantyne, a law student at New York University, holds two bachelor’s degrees from Stanford University and a master’s degree in education policy from Columbia University. She is featured in the 2012 documentary Brooklyn Castle, which explores a chess program at a low-income middle school in New York City. The Crown Heights native credits her late grandmother for her passion for the game.

“She was the one who taught me chess,” said Ballantyne, who was an active participant in chess initiatives at her elementary and middle schools.  “I miss her a lot.”

“I just wasn’t able to give her the gratitude or just appreciate her for all that she’s given me while she was alive,” Ballantyne said of her grandmother, “and so I need to do this one thing for her.”

Despite her successes, Ballantyne seems wary to rock the trailblazer crown because of the expectations of people of color.

“It’s because I’m Black, and it’s because I’m a girl that people think it’s so impressive, and it’s not,” Ballantyne said. “I’m just a girl who loves this game, and there are other people who are good at it too.”

At the chess tournaments she frequents, Ballantyne said she’s grown accustomed to being the only Black woman in attendance.

“I think it’s a product of the game,” she contended. “Chess isn’t very accessible for people who look like me and for people who come from the same background that I do.”