This week, rapper and successful TV producer 50 Cent took to Instagram with casting news about the popular Starz series.

The Starz hit series BMF is coming back for Season 2, and Mo’Nique is coming along for the ride, according to executive producer 50 Cent.

This week, the rapper and successful television producer shared on Instagram that the Academy Award winner would be joining the cast of BMF, which follows the Flenory family in 1980s Detroit and had its first season on Starz last fall.

Under a video of Mo’Nique announcing her involvement, 50 Cent wrote in the caption: “Guess who i got in BMF this season GOLDIE! GLGGreenLightGang I don’t miss, THE UNDER DOG’s BACK ON TOP.”

Goldie is the role the actress plays in the upcoming season, which Mo’Nique, dressed in character, underscores in the clip, declaring, “My name is Goldie. You know who the f*ck I am.”

Per Deadline, Goldie is “a sophisticated Atlanta strip club owner with swagger and street smarts. She forms an alliance with the Flenory brothers, which will help fuel their migration from Detroit to Atlanta.” The description continues to define her as “a fierce protector of her dancers and the people in her world,” who “isn’t afraid to take care of business, no matter what the cost.”

This casting update comes just a few weeks after 50 Cent took to Instagram about Mo’Nique, saying the world needed to “uncancel” the actress. 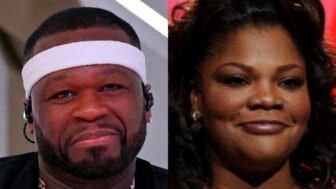 He posted a clip of her acclaimed 2009 Precious performance mashed up with a scene from Power and wrote: “I Gotta get @therealmoworldwide back in pocket, we only suppose to cancel sh*t that ain’t good for the culture. we need you to WIN again now MONIQUE.”

Days later, he also addressed Tyler Perry and Oprah Winfrey — who Mo’Nique claimed blackballed her after Precious — writing to them: “I’m sure Oprah Winfrey and Tyler Perry would not want to continue to allow their influence to damage @therealnoworldwide career and this has gone on for way to long. So now would be a great time to apologize because i’m gonna put her back on.”

As theGrio previously reported, BMF was a hit for Starz last year, earning top ratings with its premiere. Per Shadow and Act, the series ranks as “one of the most highly engaged series premieres ever, with a strong completion rate across OTT platforms based on preliminary reporting.”

The drama was renewed for a second season in October.