Scientists predict multiple coronavirus reinfections may be here for a while

But those who have been vaccinated won’t likely become seriously ill if reinfection becomes the new normal.

A poll by Axios found that one in three Americans believes that the COVID-19 pandemic is over, but scientists have warned that we may be dealing with the virus for the foreseeable future.

Jeffrey Shaman, an epidemiologist at New York’s Columbia University, told The New York Times that he discovered that people were being infected multiple times within a year.

At the onset of the pandemic, experts assumed the virus would be similar to the flu and produce one large outbreak during a calendar year. On the contrary, each new COVID-19 omicron variant breaches vaccine-strengthened immune systems, bringing with it another wave of infections.

“The virus is going to keep evolving,” said Juliet Pulliam, an epidemiologist at Stellenbosch University in South Africa, according to the Times. “And there are probably going to be a lot of people getting many, many reinfections throughout their lives.”

Kristian Andersen, a virologist at the Scripps Research Institute in San Diego concurs with Pulliam, asserting that many will be infected at least twice a year because of the unpredictable nature of COVID-19, including many who have had several vaccinations.

“I would be very surprised if that’s not how it’s going to play out.”

The U.S. Food and Drug Administration has authorized the use of pills to treat COVID-19. The Pfizer-made pill reportedly stops the virus from replicating and can help reduce symptoms. 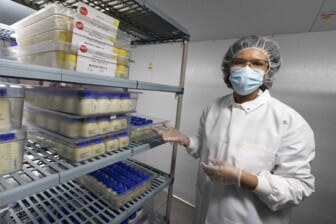 There is also other encouraging news. Those who have been vaccinated won’t likely become seriously ill if reinfection becomes the new normal. Shaman of Columbia University informed the Times that the coronavirus is “not going to simply be this wintertime once-a-year thing and it’s not going to be a mild nuisance in terms of the amount of morbidity and mortality it causes.”

Other experts interviewed by the Times urged scientists to ramp up the speed of vaccine updates to keep pace with the variants.

According to Johns Hopkins University, which has been one of the major entities tracking COVID-19-related data since the beginning of the pandemic, more than 1 million Americans have died because of illnesses related to the virus — a milestone that was reached on Monday.