Laverne Cox is celebrating her 50th birthday with her own Barbie

The history-making Laverne Cox Barbie is part of the brand's Tribute Collection, honoring the actor-advocate's impact on LGBTQ+ rights.

Transformative. That’s one word to describe the immeasurable impact actress-activist Laverne Cox has had upon trans visibility, inclusion and acceptance. Since becoming a household name in 2013 with her Emmy-nominated turn as Orange Is the New Black‘s Sophia Burset, Cox has leveraged her platform and growing fame to break barriers for not only herself but countless others, earning a GLAAD award and a slew of history-making firsts too numerous to list.

As shared with theGrio via a press release, recently added to those firsts is a Barbie crafted in Cox’s image—the first Barbie doll made in the likeness of any transgender woman. Released on Wednesday, May 25, just days before Cox’s 50th birthday on May 29 and the start of Pride Month on June 1, the Laverne Cox Barbie is part of the brand’s Tribute Collection, crafted in honor of the trailblazer’s ongoing influence and advocacy for LGBTQ+ rights. 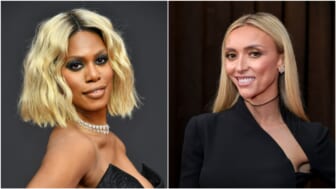 “We couldn’t be more excited to celebrate award-winning actress, producer, writer and LGBTQ+ rights trailblazer Laverne Cox with a doll,” said Lisa McKnight, Executive Vice President and Global Head of Barbie and Dolls, Mattel, in a statement. “We are proud to highlight the importance of inclusion and acceptance at every age and to recognize Laverne’s significant impact on culture with a Tribute Collection Barbie.”

Barbie worked closely with Cox on the creation of the fashion doll, explaining that the process began “by researching red carpet looks where she truly shines to recreate her iconic makeup and hairstyle,” as well as signature pieces from her own wardrobe. Cox approved initial sketches of the resulting gown, which was rendered in her favorite color, “deep, oxblood red,” over a silvery-white strapless and heeled catsuit. “Beyond sketches, skin tone samples and body sculpts were shipped to Laverne to capture her comments and stamp of approval on every inch of her doll,” according to the brand.

“It’s been a dream for years to work with Barbie to create my own doll,” said Cox. “I can’t wait for fans to find my doll on shelves and have the opportunity to add a Barbie doll modeled after a transgender person to their collection.”

“Barbie knows that representation matters and is committed to continuing to increase diversity across collections, so that more people can see themselves reflected,” added parent company Mattel. 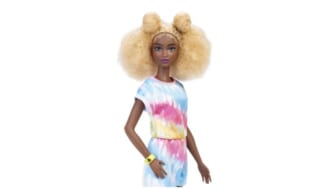 The collaboration goes even further, as Barbie is also celebrating Cox 50th  by making a donation in her name to one of her cherished nonprofit partners, TransFamilySOS, which “is on a mission to create a more gender affirming and accepting community.”

The Laverne Cox Barbie is available beginning May 25 for a suggested retail price of $39.99 on Amazon, Walmart, Target, and MattelCreations.com. Reflecting on her latest milestone, Cox said:

“I hope that people can look at this Barbie and dream big like I have in my career. The space of dreaming and manifesting is such a powerful source and leads you to achieve more than what you originally thought was possible.”

Maiysha Kai is Lifestyle Editor of theGrio, covering all things Black and beautiful. Her work is informed by two decades’ experience in fashion and entertainment, great books and aesthetics, and the brilliance of Black culture. She is also editor-author of Body (Words of Change series).