A flyer claiming that America’s biggest-known anti-Black domestic terrorist group is “alive and growing” was left at a predominantly Black church in DeSoto, Mississippi, according to The Memphis Commercial Appeal.

The flyer was shared on Facebook by someone seeking information “to know who to look out for,” claiming it was discovered a month before Union Hill Missionary Baptist Church’s 143rd anniversary. The paper claims “The Old Glory Knights of the Ku Klux Klan is alive and growing in 14 states,” listing Tennessee, Ohio, Texas, Virginia, New York, North Carolina, South Carolina, Maryland, Mississippi, Illinois, Louisiana, Alabama, Kentucky and Florida.

Despite this claim, the oldest and most infamous hate group in America may not actually be growing, according to the Southern Poverty Law Center.

“Across the board, in all states, Klan groups are declining,” Lydia Bates, a senior SPLC research analyst, told The Commercial Appeal. “That doesn’t stay constant, it’s not a constant decline every year, because of the inner workings of the Klan. They are, not surprisingly, not good at conflict resolution, so there is a lot of infighting that splits up groups and then they splinter into other smaller groups and they make new names, but it’s all the same members.”

As previously reported by theGrio, there have been recurring instances of hate groups leaving flyers in Southern states. In April, a flyer was left in a diverse neighborhood of Atlanta reading, in part, “Race traitors, mixed breeds, communists, homosexuals, and all other walks of Godless degeneracy, the Klan is back again and here to stay, so you’d better make amends or stay away!!”

Dispensing flyers is a “low cost, low stakes way” to get their messages out and maintain anonymity while also attempting to recruit, according to Bates. 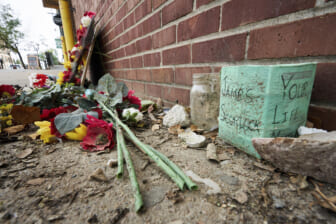 Also Read:
Judge: Prosecutors not liable for death of white bar who killed himself after being charged in death of BLM protester

“Them saying that they are growing in 14 states is pretty unbelievable,” she said. “The Klan has been declining a lot in the last five to ten years. They are really losing a lot of members, not attracting new recruits. That is really just self-aggrandizing.”

The flyers have been used by the Klan for over 100 years to intimidate — and even now, they’re still scary.

“A hate group built on a 150-plus-year history of violence, you can’t dismiss it as just them trying to seem bigger than they are,” Bates noted, “because there is violence in their words inherently.”