The prosecutor said "we have no choice but to question" dozens of homicide investigations.

Philadelphia District Attorney Larry Krasner said he will review about 80 cases that were investigated by Philip Nordo. A former Philadelphia Police homicide detective, Nordo was convicted this week of rape, official oppression, stalking, and theft by deception, the Philadelphia Inquirer is reporting.

“We are looking at a situation where literally dozens of homicide investigations were conducted by Detective Nordo in a way we have no choice but to question now,” Krasner said at a news conference after the verdict in the two-week trial.

“Because we know that what he was actually doing didn’t have much to do with finding out who was guilty and who was innocent,” Krasner said, “and it had a whole lot to do with forcing people to submit to his violent sexual demands. And that means we have to reconsider dozens of homicide convictions. It means there will be, there have been, exonerations.”

So far, four people will be retried and many of those convicted of murder are suing the city. Eleven murder convictions have been overturned. 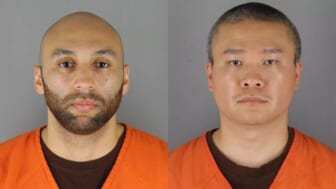 One man is hoping that his murder conviction will be another to be overturned. In a case cited by the Inquirer, Marvin Hill claims that he was propositioned by the then-detective, who told him that if he acquiesced to his sexual advances “all this” – meaning a possible murder charge –  would go away. Hill recalled that when he rebuffed the advances, Nordo pledged “to make sure Hill’s life was a living hell and make sure he never saw daylight again.”

Hill was convicted of a 2010 murder and remains in prison on a sentence of life without possibility of parole.

Nordo was first charged in 2019. At the time, the DA began to review his cases from 2009 to 2017. In some, it was concluded that his role was minor or that there was no misconduct. Another 20 cases are still under review – to ascertain not only whether there was evidence that Nordo tainted the case, but whether his influence was so pervasive that it could impact the integrity of the conviction.

Over the course of the trial, Nordo was accused of sexually assaulting witnesses and defrauding the city through a reward fund associated with a murder case, according to the Inquirer.