NFL coach says he’s ‘respectful,’ expressing himself ‘as an American’ in comparing BLM protests and Jan. 6

The assistant coach for the Washington Commanders apologized for calling the Jan. 6 insurrection a "dust-up," but he stuck by statement about protests in the wake of George Floyd's death.

ASHBURN, Va. (AP) — An assistant coach for the NFL’s Washington Commanders issued an apology for his word choice after doubling down on a comparison he made on social media between the violent attack on the U.S. Capitol on Jan. 6, 2021, and the protests in the wake of the police killing of George Floyd.

Jack Del Rio, a former linebacker who now runs Washington’s defense, downplayed the deadly insurrection and questioned why the summer of 2020 protests were not receiving the same scrutiny. His comments Wednesday after an offseason practice came a day before a House committee investigating the pro-Donald Trump disruption of Congress 17 months ago begins public hearings on the matter.

“People’s livelihoods are being destroyed, businesses are being burned down, no problem,” Del Rio said. “And then we have a dust-up at the Capitol, nothing burned down, and we’re going to make that a major deal. I just think it’s kind of two standards.”

Amid backlash for his comments, Del Rio released a statement on Twitter Wednesday afternoon apologizing his word choice. Del Rio said it was “irresponsible and negligent” to call the riot a “dust-up.” But he said he stood by comments “condemning violence in communities across the country.”

His comments followed a Twitter post Monday night in which he said, “Would love to understand ‘the whole story’ about why the summer of riots, looting, burning and the destruction of personal property is never discussed but this is ???” He was responding to a tweet about the Congressional hearings into Jan. 6.

Del Rio and coach Ron Rivera say they aren’t concerned if the opinion will upset Black players who make up the majority of their team, some of whom spoke out about police brutality and racism in the wake of Floyd’s killing two years ago.

“If they are (concerned) and they want to talk about it, I’d talk about it with anybody,” Del Rio said. “No problem. At any time. But they’re not. I’m just expressing myself and I think we all as Americans have a right to express ourselves, especially if you’re being respectful. I’m being respectful.” 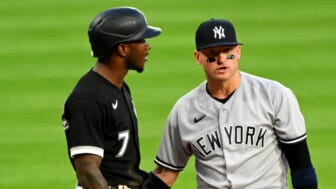 Also Read:
Calling a Black baseball player ‘Jackie’ is not a compliment

Washington defensive back Kendall Fuller, a Black player, said he was not aware of Del Rio’s tweet. After a reporter read it to him, Fuller said: “I don’t have a reaction right now. If I have a reaction, a feeling, towards something, I’ll express that with him.”

Del Rio, 59, has posted conservative opinions to his verified Twitter account numerous times since joining Rivera’s staff in Washington in 2020.

“Anything that I ever say or write, I’d be comfortable saying or writing in front of everybody that I work with, players and coaches,” Del Rio said. “I express myself as an American. We have that ability. I love this country and I believe what I believe and I’ve said what I want to say. Every now and then, there’s some people that get offended by it.”

The remarks generated a prompt backlash from some Virginia lawmakers, who for months have been considering whether to pass legislation intended to incentivize the team to build a new stadium in the commonwealth by offering generous tax incentives. Two northern Virginia Democratic senators who had previously been enthusiastic supporters of the measure expressed concerns about Del Rio’s comments.

Jeremy McPike tweeted a clip of Del Rio speaking with the message: “Yup. Just sealed the deal to cast my vote as a NO. I think what’s burning down today is the stadium bill.” Scott Surovell predicted there would be no more “votes on stadium bills this year.”

Senate Majority Leader Dick Saslaw, a sponsor of the bill, said the comments were “not helpful” but talks over the legislation would continue. The measure initially cleared the state with broad Senate support, but other defectors had raised concerns even before Del Rio’s remarks.

With five years left until their current lease at FedEx Field is set to expire, the Commanders have no stadium deal in place with Virginia, Maryland or the District of Columbia.

Rivera, who hired Del Rio to run Washington’s defense without any prior relationship, said he would not discuss anything he talks with his staff about.

“Everybody’s entitled to their opinion, though,” Rivera said. “If it ever becomes an issue or a situation, we’ll have that discussion. Right now, it’s something that I will deal with when it comes up.”

Washington’s defense ranked 22nd out of 32 teams last season after being the league’s second-best in 2020. Del Rio said he likes his players and welcomes any dialogue with them.

“Let’s have a discussion. We’re Americans,” he said. “Let’s talk it through. I’m for us having a great opportunity having a fulfilled life every which way I can. When I’m here it’s about love and respect. I love my guys, I respect my guys but I also love the fact that I’m an American and that means I’m free to express myself. I’m not afraid to do that.”