Ms. Marvel, the Marvel Cinematic Universe’s new Disney+ series, is officially here and theGrio sat down with Travina Springer, who appears in a brand new role in the boundary-pushing streaming series.

Ms. Marvel introduces viewers to a Marvel superhero unlike any other previously seen in the Marvel Cinematic Universe. Kamala Khan is a 16-year-old Pakistani-American in Jersey City, New Jersey who is obsessed with all things superheroes, but one special powered hero in particular: Captain Marvel.

Rich in culture and vivid storytelling, the series brings major much needed representation to the MCU as Khan’s world suddenly shifts when she gets super powers of her own. Joining the series as Khan’s sister-in-law is Tyesha Hillman, played by Travina Springer. 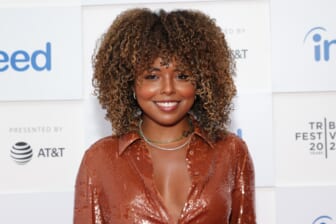 “I think when they told me I was just silent,” Springer joked when detailing the moment she learned she’d be joining the Marvel Cinematic Universe. “I was just so grateful and so stoked to play such an important character in an important series.”

Raised Catholic, Springer’s character, Tyesha, is a Black woman who converts to Islam with a strong sense of confidence and power. This story, rooted in such rich culture and storytelling, jumped out immediately to Springer.

“Aside from it being a Marvel project, this was an intelligent, strong, self-assured Black woman who was also a convert to Islam,” she explained. “On top of that, Tyesha in the comics is a huge nerd! I know that you don’t see characters like this. I have never seen this before, but what’s so crazy is that I know women like Tyesha. I am so excited for a larger audience to see her. She is layered and also unapologetically muslim.”

The series also gave the cast and crew an opportunity to tell a very special story during unprecedented times as producing began shortly after Hollywood gave the greenlight to resume productions during the COVID-19 pandemic. “There was an added layer of, not only am I working on a Marvel project but also we are coming out of a very scary time for everyone,” she said. “That made it very special.”

Of course being associated with a Marvel project, Springer has been tight-lipped about it for years. Now, she is excited to finally be able to talk about it. “Usually when you get a project you can tell people about it, but with Marvel everything is top secret,” she mused. “I’m like, ‘I can’t tell my parents, don’t worry about why I’m in Atlanta’!” 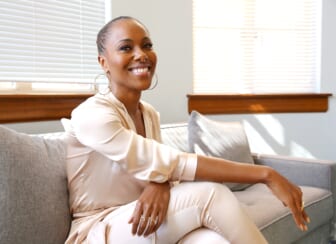 Springer is excited not only for her parents, but for fans around the world to see this series that is so grounded in family. “People haven’t seen this,” she added. “I think what makes Ms. Marvel so special is that family is important. She has this beautiful and loving relationship with her family and it’s also a family-friendly project. Her heritage and her Pakistani-American-ness and Muslim-ness are front and center. And with my character in particular, I can’t remember seeing a Black, Muslim convert woman who wears a scarf who is also all of these wonderful things. It’s really something.”

The first two episodes of Ms. Marvel are currently streaming on Disney+.