Broadway is back! After a complete year-long shutdown and a slow return last season, the theater community came together on Sunday night to celebrate its first full season since the COVID-19 pandemic hit, and Pulitzer Prize-winning musical, “A Strange Loop,” took home the biggest prize of the night. 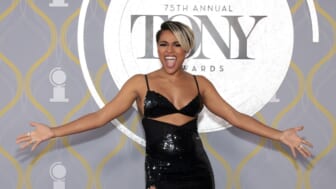 Jackson, who started working on the project almost 20 years ago, said in his speech, “I wrote it at a time when I didn’t know what I was going to do with my life. I didn’t know how I was going to move forward. I felt unseen. I felt unheard. I felt misunderstood, and I just wanted to create a little bit of a life raft for myself as a Black gay man.”

The show also made history when Jennifer Hudson earned a Tony for co-producing the musical, ushering her into the esteemed EGOT (Emmy, Grammy, Oscar and Tony award winner) category of artists. “A Strange Loop” even made history during the announcement of the nominations earlier this year when L. Morgan Lee, an actress in the show, became the first openly trans actress to ever be nominated for a Tony Award.

“MJ the Musical” also took home some major awards, including Best Choreography and Best Performance by an Actor in a Leading Role in a Musical. Myles Frost, who plays Michael Jackson in the jukebox musical, gave a powerful speech dedicated to his craft and family, all after taking to the stage to perform “Smooth Criminal” with his castmates.

“Mom, I made it. I am so honored and so blessed and so grateful,” he said before gleefully singing, “I just can’t control my feet” from “Blame it On the Boogie” by the Jacksons.

Another standout performance of the night came from “Paradise Square” actress Joaquina Kalukango, who brought the house down with her big song, “Let it Burn.” In her speech for Best Performance by an Actress in a Leading Role, she dedicated it to God, her ancestors that came before her and her family.

The show also featured a rousing speech from Phylicia Rashad, who took home the Tony Award for Best Featured Actress in a Play for her work in Skeleton Crew. While accepting the award, Rashad stressed that a win like this is “the work of many people,” and that no one comes to it alone.

Ariana DeBose, fresh off her history-making win at the Oscars this year, hosted the ceremony, which was a rousing tribute to all things Broadway. From reference to famous shows like “A Chorus Line” and “Chicago,” to some of her own credits including “Hamilton” and “Bring it On!”, DeBose sang and danced throughout the entire show, which focused not only on the big stars of Broadway, but the understudies, crew and COVID-19 team members who were vital in helping the industry bounce back.

Best Revival of a Play

Best Revival of a Musical

Best Book of a Musical

Best Original Score (Music and/or Lyrics) Written for the Theatre

Best Scenic Design of a Play

Best Scenic Design of a Musical

Best Costume Design of a Play

Best Costume Design of a Musical

Best Lighting Design of a Play

Best Lighting Design of a Musical

Best Sound Design of a Play

Best Sound Design of a Musical

Best Direction of a Play

Best Direction of a Musical