U.S. Senate candidate Herschel Walker repeatedly said he worked in law enforcement. There’s no proof he ever did

Despite Walker's assertions over the years, there's no evidence that the Georgia Republican hopeful's claims are true.

U.S. Senate candidate and former football player Herschel Walker is claiming that he has a history of working in law enforcement. There is no evidence, however, that the Georgia Republican hopeful’s claims are true.

The Atlanta Journal-Constitution asserts that Walker gave a speech in 2019 in front of a group of soldiers at Joint Base Lewis-McChord, where he said, “I worked for law enforcement, y’all didn’t know that either? I spent time at Quantico at the FBI training school. Y’all didn’t know I was an agent?”

The newspaper reported Monday that it had reviewed dozens of speeches and motivational talks by Walker, who has said multiple times that he’s been in law enforcement. ”I work with the Cobb County Police Department, and I’ve been in criminal justice all my life,” he said in 2017. In 2000, he claimed to be “a certified peace officer.”

His claims have reportedly stopped since Walker entered the Senate race, The AJC says. A spokesperson for his campaign told the outlet that Walker majored in criminal justice at the University of Georgia and “has supported and worked with law enforcement for years, including speaking to police about mental health, leading women’s self-defense training, participating in the FBI Academy at Quantico.” 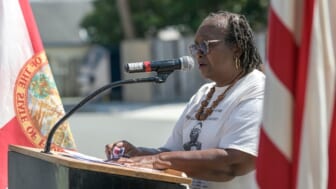 Also Read:
City honors man who fought to integrate U of Fla. law school, then gave up his fight so Black people could earn master’s degrees

The unidentified spokeswoman maintained that Walker was an honorary deputy in Cobb County and three other counties in Georgia, but The AJC said police in Cobb County had no record of it, nor could its sheriffs confirm it.

Experts note that being an honorary officer carries zero weight in law enforcement.

Walker, who has been open about his history with dissociative identity disorder, has had personal contact with law enforcement. The 1982 Heisman Trophy winner has been accused of domestic violence, stalking, and other violent tendencies against a former wife and her sister.