The latest such study also noted racial and ethnic disparities in death rates for pedestrians.

Several studies, including one that was published this month, have found that African Americans and Hispanics who travel by “vulnerable” means such as biking and walking die at higher rates than previously known.

The most recent study, “Disparities in Activity and Traffic Fatalities by Race/Ethnicity,” found that “fatality rates per 100 million miles traveled are systematically higher for Black and Hispanic Americans for all modes and notably higher for vulnerable modes.”

Black Americans died at more than four times the rate of white Americans while cycling and more than two times more while walking. The study, published in the American Journal of Preventive Medicine, noted that previous estimates underestimated the racial disparities.

The study found that Asian Americans had the lowest fatality rates across all modes of travel.

The racial and ethnic disparities, which are exacerbated at night, are alarming, particularly considering that Black and Hispanic Americans bike and walk fewer miles. “It might indicate that, for example, Black Americans or Hispanic Americans are less able to cycle, they don’t have access to transportation in that way,” Ernani Choma, a co-author of the disparities study, told ABC News. “Maybe it’s less bike lanes. Maybe they don’t even bike because they feel unsafe.”

Some implications are that Black and Hispanic people may be missing out on the health benefits of physical activity as well as the reduction of air pollution that bike lanes and pedestrian spaces add to urban areas.

Choma’s co-author on the disparities study, Matthew Raifman — a Boston University School of Public Health doctoral candidate — noted that inequities in medical services such as emergency response times, quality of care and pre-existing conditions could also account for disparities. 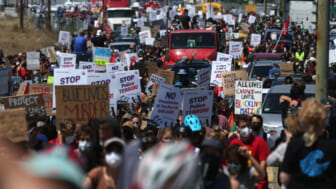 ABC News interviewed one Philadelphia resident who lost four members of her family who were struck and killed while crossing a 12-lane road. “It was just so devastating,” Latanya Byrd said. “We lost two generations in one swoop. I mean, just an instant snap of the finger.” Byrd, co-founder of the Families for Safe Streets Greater Philadelphia advocacy group, observed that a dated transportation infrastructure contributed to the death of her loved ones.

Raifman told ABC News that there is an opportunity to not only address fatalities, but to address structural inequities. This is something that local policymakers can do in part with funds from the newly signed Infrastructure Investment and Jobs Act, which provides $550 billion in spending on roads, bridges, transit and other things.

“Instead of just investing in reducing traffic fatalities,” Raifman said, “why not do it in a way that’s also addressing the systemic, structural racism challenges in our society?”