"Portraits ‘N Color: Repowered" and "History Half Told Is Untold" will air this weekend — on Saturday, June 18th, and Sunday, June 19th.

‍HBCU GO — the digital lifestyle and sports destination owned by Byron Allen, who also owns theGrio — will debut two documentaries in celebration of the Juneteenth holiday. The free, streaming platform is the leading media provider for America’s 107 historically Black colleges and universities.

Portraits ‘N Color: Repowered and History Half Told Is Untold will air this weekend — on June 18th and 19th.

Portraits ‘N Color: Repowered is a documentary featuring a series of short films produced by Kristin Adair, chief executive officer of Unchained Stories, who weaves together the personal stories of three women from Milwaukee, New Orleans and Washington, D.C.

Adair’s project was completed with a grant from the Public Welfare Foundation, an endowment fund committed to transforming communities of color for more than 75 years. Portraits ‘N Color: Repowered follows PWF grantees Lashonia Tate and Adair, who are active in trying to transform their respective neighborhoods and improve residents’ lives, and features an interview with PWF President and CEO Candice C. Jones. It will air Saturday, June 18, at 3 p.m. and 9 p.m. EST, and Sunday, June 19, at 9 a.m. and 7 p.m. EST.

History Half Told Is Untold dives into the historic efforts of the First Baptist Church of Williamsburg, which was formed more than 245 years ago in Williamsburg, Virginia. Thought to be one of America’s very first Black churches, the historic church was created in 1776 by a union of free and enslaved Blacks, even though laws existed then forbidding Blacks from gathering.

First Baptist Church of Williamsburg has played witness to everything from slavery in the U.S. to its tumultuous civil rights movement. From behind its pulpit over 60 years ago, Dr. Martin Luther King, Jr. delivered his message, inspiring many and moving even more into action. Exploring that period up through modern times, History Half Told will air Sunday, June 19, at 8 p.m. EST. 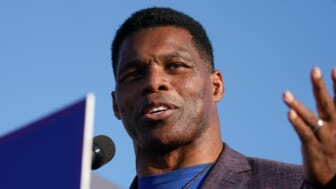 Also Read:
Herschel Walker, who blasts absentee dads, reportedly has three ‘secret’ children with whom he has no close relationship

“Juneteenth is an incredibly important historical mark in American history that should be more fully realized, explored and excavated,” said Curtis Symonds, president of HBCU GO. “We are proud to present these two distinct documentary specials exploring the roots of the Black church and untrumpeted women trailblazers fighting on the front lines for transformative justice.”

Both documentaries will be available on HBCUGO.TV, Roku, Amazon Fire TV and Apple TV.  They can also be viewed by downloading the HBCU GO app.