Herschel Walker, who blasts absentee dads, reportedly has three ‘secret’ children with whom he has no close relationship

Former football great and U.S. senatorial candidate Herschel Walker, who has criticized absentee fathers, has not one, but a total of three “secret” children with whom he allegedly has no close relationship.

One day after confirming that he had one such child, the 60-year-old Georgia Republican, who hopes to unseat Democratic Sen. Raphael Warnock, has confirmed in a statement obtained by CNBC that he has another son and a daughter whom he has shielded from the public and whom he supports financially. He was not married to either mother when she gave birth to a daughter, who is now an adult, and a son, who is now 13.

“I have four children. Three sons and a daughter,” Walker said in the statement. “They’re not ‘undisclosed’ — they’re my kids. I support them all and love them all. I’ve never denied my children, I confirmed this when I was appointed to the President’s Council on Sports Fitness & Nutrition,” he said.

“I just chose not to use them as props to win a political campaign. What parent would want their child involved in garbage, gutter politics like this,” Walker added, referring to the bitter campaign with Warnock. “Saying I hide my children because I don’t discuss them with reporters to win a campaign? That’s outrageous. I can take the heat, that’s politics — but leave my kids alone.”

Walker’s campaign manager, Scott Paradise, confirmed in a statement on Wednesday that the Heisman Trophy winner had an unnamed 10-year-old son that he supports financially, according to CNBC.

These revelations are particularly galling to Walker’s critics because he has taken pains to talk about the importance of fathers in the lives of children and has been especially critical of Black men who abandon their children. 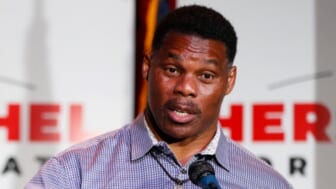 The news about Walker’s 10-year-old son was first reported by the Daily Beast, which withheld the names of the child and his mother for privacy reasons. Walker shares his 22-year-old son, Christian, with his ex-wife Cindy DeAngelis Grossman.

He previously told pro-Trump media personalities Diamond and Silk that if you have “a child with a woman, even if you have to leave that woman … you don’t leave the child.”

Paradise confirmed that Walker is not actively involved in raising his 10-year-old son. The mother of the boy took Walker to court for child support a year after giving birth and to secure a declaration of paternity, according to the Daily Beast report.

“Herschel had a child years ago when he wasn’t married,” Paradise said in a statement. “He’s supported the child and continues to do so. He’s proud of his children. To suggest that Herschel is ‘hiding’ the child because he hasn’t used him in his political campaign is offensive and absurd.”

Meanwhile, Walker has publicly condemned absentee fathers while touting his close relationship with Christian. “If you got a child, hug your child every day,” Walker said in a 2017 speech, per the Daily Beast report. 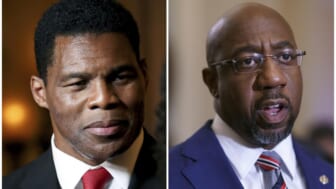 In a September 2020 interview cited in the Daily Beast report, Walker made pointed comments about black absentee fathers: “And I want to apologize to the African-American community, because the fatherless home is a major, major problem,” noting that he’d been “like a father to some of those kids that had never had fathers.”

According to the New York Times, Bakari Sellers, a former Democratic state lawmaker from South Carolina, called out Walker’s hypocrisy on Twitter, saying he was “out here lecturing black men on fatherhood and ain’t seen his kid since Obama’s first term.”