During remarks on Friday at the White House, the president vowed to "do everything in [his] power to fight" against the Supreme Court ruling on abortion but acknowledged the limitations of the executive branch.

As the nation reels after the Supreme Court’s decision to overturn Roe v. Wade, President Joe Biden has set the political stage for Democrats to combat the conservative movement to restrict abortion access, including crossing state lines where abortion is still legal and battling it out at the ballot box.

In his remarks Friday afternoon, President Biden said that the court’s overturning of Roe was a “tragic error.”

“It’s a sad day for the court and for the country,” said Biden from the White House East Room a few hours after the Supreme Court decision in Dobbs v. Jackson. The commander in chief said that the court’s decision “will have real and immediate consequences.” 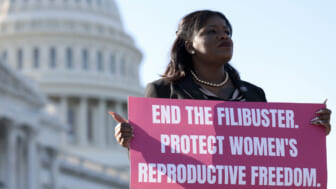 Now that abortion access is no longer a constitutional right, states can now determine their own abortion laws. The president noted that state laws banning abortion have automatically gone into effect – including so-called “trigger bans.”

The Supreme Court ruling will impact more than 36 million women of reproductive age and even more people who can become pregnant, according to research conducted by Planned Parenthood.

President Biden took a stance that has been expressed by many members of the Democratic Party who vowed to protect a person’s right to an abortion as more than a dozen states have already banned or significantly restricted the procedure.

“If a woman lives in a state that restricts abortion, the Supreme Court’s decision does not prevent her from traveling from her home state to the state that allows it,” said Biden. “Women must remain free to travel safely to another state to seek the care they need.”

The president said that his administration will “defend that bedrock right.”

”If any state or local official, high or low, tries to interfere with a woman exercising their basic right to travel, I will do everything in my power to fight that deeply un-American attack,” said Biden.

President Biden also called on Americans who are outraged by the Supreme Court decision to let their frustration be felt at the ballot box. He called on voters to elect more Democrats in the U.S. House and Senate so that the legislative branch can do its work to codify abortion rights. 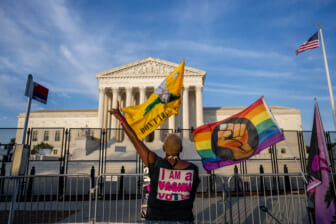 Acknowledging the limitations of his power as president, Biden said, “no executive action from the president can” restore the protections of Roe v. Wade as federal law. “And Congress, as it appears, lacks the vote to do that now,” he added.

“Voters need to make their voices heard [and] this fall must elect more senators, representatives who will codify a woman’s right to choose in the federal law once again,” said the president.

While Democrats currently hold a majority in the House and an even slim majority in the 50-50 split Senate — when including Vice President Kamala Harris’ tie-breaking vote as president of the upper chamber of Congress — the Senate filibuster still requires at least 60 votes. Without more Democrats in office, Congress is unable to send an abortion bill to President Biden’s desk.

“Personal freedoms are on the ballot, the right to privacy, liberty, equality are all on the ballot,” said Biden. “Until then, I will do all in my power to protect a woman’s right in states where they will face the consequences of today’s decision.”

Christie Roberts, executive director of the Democratic Senatorial Campaign Committee (DSCC), reiterated the need to elect more Democrats in the Senate. “Today’s decision dramatically escalates the stakes of the 2022 elections, and we’re making sure Americans have the tools they need to channel their anger into action,” Roberts said in a statement.

“This on-the-ground organizing work will help elect Democrats who will fight to protect women’s right to make their own health care decisions and ensure the GOP’s cruel agenda to making abortion illegal and punish women is front and center for voters across the Senate battlegrounds.”

Biden also said his administration will protect a woman’s access to contraception and other medicines already approved by the Food and Drug Administration (FDA). He warned that some states are trying to ban or “severely restrict access” to these medications.

“Extremist governors and state legislators,” he said, “are looking to block the mail or search a person’s medicine cabinet or control a woman’s actions by tracking data on her apps to users are wrong, extreme and out of touch.”

The president also called on more state leaders to protect the right to an abortion at the local level. 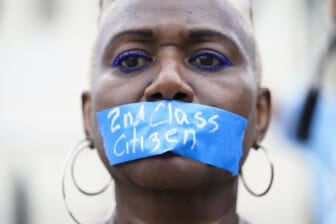 Meanwhile, passions are running high on both sides of the spectrum following the Supreme Court’s 5-4 decision. President Biden called for peaceful protests and for demonstrators to “stand against violence of any form.”

In efforts to maintain the peace, the White House has for weeks been strategizing ways to quell or head off any violent clashes over the Supreme Court ruling. The Department of Homeland Security (DHS) and the Department of Justice (DOJ) are just two of the federal agencies in this collaborative effort.

In his Friday address, a somber President Biden vowed that the fight over abortion rights is “not over.”

“You can act [and] you can have the final word,” he said to American voters.