Who will take a chance on Kyrie?

OPINION: The Brooklyn Nets guard seems set on turning down his option and seeking a trade. But which NBA team will take the risk of adding the mercurial superstar? 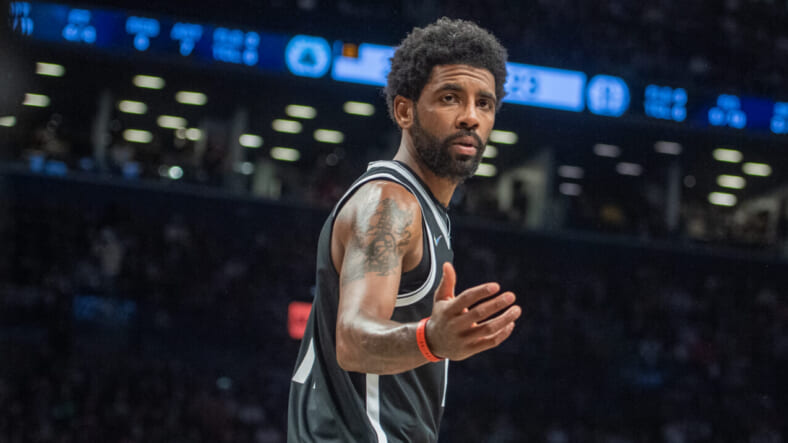 Brooklyn Nets' Kyrie Irving looking for the inbound of the ball while playing the Boston Celtics in the first quarter at the Barclays Center in Brooklyn, New York on April 23, 2022. (Photo by John Conrad Williams, Jr./Newsday RM via Getty Images)

What would Kyrie do?

If Kyrie Irving were an NBA general manager instead of an NBA superstar, would he give himself a five-year, $250 million deal like Brooklyn can offer? It’s not an easy question.

Maybe he’d be so deep and so introspective as a GM that he’d determine that the supremely talented and tantalizing player couldn’t be trusted with such a sizable commitment.

I suppose he’d sign himself in the end, though, knowing he’d eventually act up and the team would suffer regret. The GM might get fired, too, but the player gets paid either way.

Also Read:
Kyrie Irving is neither a victim nor a hero

The playoffs ended nearly two weeks ago and we’re still adjusting to the hardwood hiatus (shoutout to the WNBA for scratching the itch). With NBA action on pause, the offseason drama is here and a major twist is ahead. Irving’s impending decision will reverberate around the league and the locker room he shares—for now—with former MVP Kevin Durant.

June 29 is Irving’s deadline to accept or decline his player option with Brooklyn. That might seem like a no-brainer: “OK, I’ll let you pay me $36 million for one season. You’re welcome.”

But Irving actually has good reason to pause. Turning down the option creates the prospect of a multi-year deal worth goo-gobs more money. According to multiple reports, the Nets have struggled to reach a long-term contract with their mercurial guard, who thus created a list of preferred trade destinations and received permission to explore them.

Heat owner Micky Arison likely had Irving in mind two days after the reports. Arison tweeted out a link to “This is the Best Evidence Yet that Anti-Vaxxers Kill,” an article putting him at direct odds with Irving, a notorious vax rejecter. Clippers president Lawrence Frank seemingly threw shade last week when asked about the player traits he seeks in deals. Frank told reporters that “basketball character is, like, can you be counted on every single day to do what you do at the highest level, and are you—how committed are you through those habits?”

Let the record show that Irving took two leaves of absence in 2020-21—he was spotted at a relative’s birthday party during the unauthorized disappearance—and played only 33 of 85 games last season (including the playoffs), primarily because he refused the vaccine.

I don’t see Mavericks coach Jason Kidd putting up with Irving’s antics or putting Luka Doncic’s development at risk. And don’t even think about Philly as a landing spot. James Harden burned several bridges to put Irving and Brooklyn behind him.

He might rip off his beard if a reunion looms.

That leaves the Lakers and Knicks, who have opposite reasons for potential interest. LeBron James won a title with Irving in Cleveland and arguably could win another with Irving and Antony Davis in L.A. As for my Knicks, they have a long, sorry history of being dissed by megastar free agents; Uncle Drew would be great for the marquee if/when he’s available, ending the franchise’s reign of irrelevance.

Other Knicks fans might disagree, but I want no part of Irving playing home games at Madison Square Garden. As a Brooklyn fan, too (yeah, it’s complicated), I won’t be mad if Irving departs the Nets in exchange for a decent haul of players and draft picks.

Except Durant might want out if Irving leaves. And THAT’s a problem.

Better for Brooklyn to keep them both and try to resuscitate Ben Simmons. Otherwise—perish the thought—the Nets start from scratch with Simmons as the biggest star. They’d have nothing to show after going all-in on Durant, Irving and Harden, no choice besides trying to win with a pair of aces. 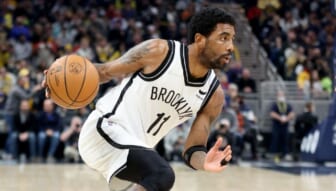 Also Read:
Why do we keep coddling Kyrie Irving?

But I don’t blame Brooklyn for proceeding cautiously. Giving Irving close to a max deal (he’s reportedly seeking around $240 million) would be automatic if based solely on his ability. Taking everything else into account, a two-year pact with options and bonuses based on his availability sounds right.

Irving naturally prefers more and has some leverage in Durant, who still favors the pairing. I’d like KD to stick around if Irving bounces, but it must be a trip watching the three-year experiment implode after back-to-back Finals MVPs with Golden State.

What will Kyrie do?

No one knows, ever. That’s why he’s such a gamble, a risk not worth taking unless you’re weak and desperate.

Translation: The Knicks are a possibility.