A 6% drop in driving roughly translates to only a 1% drop in overall U.S. carbon emissions.

As Congress and now the Supreme Court stymie the Biden administration’s efforts to curb climate change, one thing the president doesn’t want — sky high gas prices — actually is nibbling away at emissions of heat-trapping gas.

Gas prices in much of the United States shot past the $5 a gallon mark last month before a slight drop, and Americans have responded by driving a bit less, two sets of data show. June gas sales are about 5% below pre-pandemic 2019 levels and 2.6% below a year ago, according to the U.S. Energy Information Administration.

Americans in April, the last month data was available, drove 6% fewer miles than the same month in 2019, according to transportation analyst Michael Sivak, a former University of Michigan professor who is a long-time tracker of driving and car-buying habits. That 6% drop is tiny compared with the 40% plunge in driving miles in April 2020 as the pandemic kicked in.

Yet, a 6% drop in driving roughly translates to only a 1% drop in overall U.S. carbon emissions, Sivak said. The U.S. climate goal is to cut carbon emissions in half by 2030 compared with 2005 levels.

“High fuel prices are a really difficult thing because they’re a double-edged sword,” said Samantha Gross, director of the energy security and climate initiative at the centrist Brookings Institution. “So prices that are high and expected to stay that way have more of a longer term ability to cut demand and my guess is the administration wouldn’t mind seeing that, but the problem is that people hate it.” 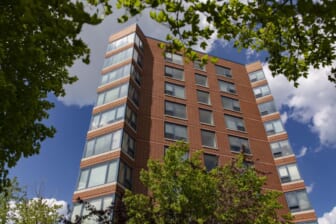 High gas prices are “unequivocally” good for fighting climate change because people use less fossil fuel and emissions go down, but the poorest people, who don’t have other options also “suffer the most,” said climate economist Solomon Hsiang, director of the Climate Impact Lab at the University of California, Berkeley. Carbon emissions are causing harm, especially to future generations, but for decades cheap gas has meant “no one is paying for that harm,” he said.

Now people are paying more when they hit the gas station and some are changing their habits.

Richard Gowan, 56, of Brighton, Michigan, used to commute 26 miles to his Ann Arbor workplace twice per week in a 2021 Ford F-150 pickup. But with gas close to $5 per gallon, he’s cut one-quarter of the truck trips. “That one doesn’t come out of the driveway near as much as it used to,” he said while pumping gas near work.

To save money, he has subbed a small Jeep Renegade SUV, which gets substantially better fuel economy than the 24 miles per gallon he gets with the pickup, which he bought to tow a travel trailer. The towing still takes place because he doesn’t want to give up family vacations, Gowan said.

He blamed the high gasoline prices on President Joe Biden’s policies. He wants Biden to open up more drilling and predicts that engineering will eventually solve climate change.

In San Diego, where gasoline runs more than $6 per gallon, Simmi Paul said her family also has reduced driving. Her daughter, a college student, now walks 10 minutes to work and takes public transportation to school rather than driving.

Even though the July 4th holiday weekend saw record number of people on the road, they were not driving as far “because they can’t afford the cost of gas,” said American Automobile Association spokesperson Devin Gladden. People who must drive, he said, “are trying to find ways they can combine some of their errands or perhaps if they are able to carpool for work they’re finding ways to reduce the amount of gas they have to buy and put in their vehicles.”

Biden has frequently said he doesn’t want high gas prices, attacked oil companies ’ multi-billion dollar profits, proposed new offshore oil and gas drilling despite campaign promises and proposed a gas tax holiday, which congressional leaders said won’t fly. Asked whether conservation should play a greater role in adjusting to high prices, White House press secretary Karine Jean-Pierre said: “Americans are going to do what they feel is right for themselves and for their family. That’s not something for us to make a judgment on.”

“The fact is there’s been a lot of studies on this — it’s just psychologically that how people tend to view the economy is through inflation,” said John Anzalone, a Democratic pollster who has worked for Biden. “People tend to focus on the pain points.”

Look at the pump for the pain point.

It’s about $200 a week for Pat Blevins, 42, a carpenter from Waterville, Ohio, who was filling the tank of his 2016 Chevrolet Silverado at a gas station west of Toledo, Ohio, on Tuesday. “It likes to eat gas,” he said of his truck, which he said gets around 15 miles per gallon.

When gasoline went past $4 per gallon in the summer of 2008, American auto buyers quickly switched away from pickup trucks and large SUVs to smaller, more efficient vehicles. But when it hit that level again in early March, there was little impact on new-vehicle sales in the U.S., where about three-quarters of vehicles sold are SUVs and trucks.

“Even at $5 per gallon, it’s hard to find evidence of changing habits” and buying smaller gas-efficient cars, said Jeff Schuster, president of global forecasting for the LMC Automotive consulting firm.

It’s partly because of the global computer chip shortage. Automakers have been sending the chips they get to factories that build larger, more profitable vehicles, Schuster said.

Still, if smaller cars and SUVs were more readily available, Schuster says he is confident that people would buy them.

Blevins said he will look at the new electric Silverado to replace his gasoline model “if it’s worth the expense and if it can perform like a gas [truck] can.” Read more about the Benefits of EV home chargers and electric cars.

Sivak thinks $5 a gallon gasoline is for the moment the price that changes Americans’ car habits, still much lower than the price paid in Europe and much of the rest of the world. 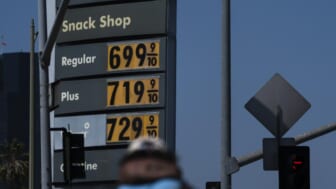 “When you talk about the real outcomes of the energy transition (to less carbon pollution) some of this does mean that things will get more expensive and we need to come up with better solutions on how we finance and ensure that everybody can participate in the energy transition and it’s not just for the wealthy or privileged few,” AAA’s Gladden said.

Some economists, such as Hsiang, have called for a carbon tax of 25 cents to 50 cents a gallon above market price “to address the harm from climate change” and reduce carbon pollution by cutting demand, but with proceeds partly returned to people and partly used for green energy projects. But at the same time, he said, “higher gas prices hurt poorer families more,” so the government should send them financial help but not subsidize cheap gas.

Brookings’ Gross said Republicans are falsely blaming Biden for the gas shortage because he cancelled a pipeline that has little to do with gas prices. She said the worldwide spike in gas prices is mostly because of pent-up, post-pandemic demand and supply issues and the Ukrainian war.