DETROIT (AP) — Detroit agreed to pay $7.5 million to settle a lawsuit by a man who claimed police switched bullets to pin a murder on him in 1992.

Desmond Ricks was released from prison in 2017 after 25 years, thanks to gun experts, law students at the University of Michigan and his unwavering insistence that he was innocent.

He was convicted of fatally shooting a friend outside a restaurant in 1992. Police seized a gun that belonged to Ricks’ mother and said it was the murder weapon.

In 2016, the Innocence Clinic at University of Michigan law school asked a judge to reopen the case. Photos of two bullets taken from the victim, Gerry Bennett, did not resemble the bullets that were examined by a defense expert before trial decades earlier.

The actual bullets surprisingly were still in Detroit police storage. Examinations showed they did not match the .38-caliber gun identified as the weapon.

A judge granted Ricks a new trial, but prosecutors in response dropped charges.

During depositions in the lawsuit, even the city’s expert acknowledged that the bullet analysis by the police lab decades ago was flat-out wrong. 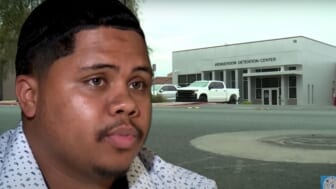 “It’s one of two things. It was a horrible mistake or it was deliberate — I don’t know,” said Jay Jarvis, who worked for 32 years at the Georgia State Crime Laboratory.

Separately, Ricks received more than $1 million from the state for his wrongful conviction, $50,000 for each year in custody. He’ll likely have to repay it now that Detroit has settled the lawsuit.