TikTok suspends, then restores, account of Black state senator who twerked upside down on beach

“My behavior on my Twitter, Instagram and TikTok are consistent with a young millennial who is in office and challenging norms,” Rhode Island Se. Tiara Mack said.

BOSTON (AP) — A state senator in Rhode Island who was suspended from TikTok after posting a video in which she twerked while doing a handstand in a bikini says she has no regrets.

Sen. Tiara Mack, a 28-year-old Providence Democrat, is Black and queer and dismissed any criticism of the 8-second clip as “misogyny, classism and racism” in a phone interview Wednesday.

“My behavior on my Twitter, Instagram and TikTok are consistent with a young millennial who is in office and challenging norms,” Mack said. “I’m showing that leadership looks different and welcoming people into the many different facets of my life.”

Her TikTok account was restored after being banned Tuesday. Spokespersons for the social media app did not respond for comment as to why Mack was suspended.

The clip has amassed more than 220,000 views since she posted it over the July Fourth weekend.

She says the snippet — which ends with her cheerfully saying, “Vote Sen. Mack!” — was part of a series of clips shot with friends on Block Island, a popular beach getaway off Rhode Island.

“It was a way to show that elected officials can be silly and have fun and enjoy a day off,” said Mack, who was elected in 2020. 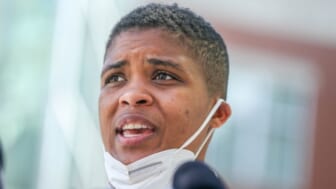 She believes the TikTok suspension was the result of an online campaign stemming from a bill she proposed this year that would require Rhode Island schools to provide sex education courses that “affirmatively recognize pleasure based sexual relations, different sexual orientations and be inclusive of same-sex relationships.”

Last week, the Rhode Island Republican Party seized on the twerking video in a fundraising appeal. And Fox News personality Tucker Carlson devoted a segment to it in which he sarcastically suggested Democrats encourage Mack to run for president.

Mack also has her supporters.

“It’s public that I’m out here casually drinking, smoking weed, and spending as much time shirtless as the summer sun will allow and it’s not an issue because I have a penis,” tweeted state Sen. Jonathon Acosta, a Democrat.

In recent days, Mack has used her newfound attention and the hashtag #twerkingfor to call for ending evictions and closing the Black wealth gap.