Gladys Knight among those selected for 45th Kennedy Center Honors

George Clooney, Amy Grant, U2, and Tania León will also be honored on Dec. 4.

Gladys Knight has been chosen as a recipient of the 2023 Kennedy Center Honors. The soul-singing icon will be joined by George Clooney, Amy Grant, U2 and Tania León.

“I’m humbled beyond words to be included amongst this prestigious group of individuals, both past and present,” Knight said in a statement accompanying the announcement. “You could never have told me as a young girl starting my career that I would be honored on a stage such as this, with artists and humanitarians such as these — it just wouldn’t have seemed possible. It would have been the dream of all dreams.”

Knight built her pristine career over more than 50 years, with seven Grammy Award wins and No. 1 hits on the R&B, pop, and adult contemporary charts. Releasing her first album in 1960, the legend along with her brother and two cousins would become known as Gladys Knight and the Pips. The supergroup would spend nearly three decades releasing classics such as “I Heard It Through the Grapevine,” “If I Were Your Woman,” “Midnight Train to Georgia” and “Love Overboard.”

The woman known as the Empress of Soul also has a star on the Hollywood Walk of Fame and she and the Pips are inductees in the Rock & Roll Hall of Fame.

“I have been blessed with so much in my life, and this certainly stands with those achievements at the top of that list,” Knight continued. “To be honored as a Kennedy Center Honoree is among the highlights of my career.” 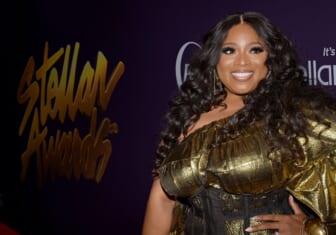 Clooney is honored for his years of success as one of Hollywood’s most beloved figures, winning Oscars as both an actor and producer. Grant earned her honor for her career as an enduring voice and presence in contemporary Christian music.

The John F. Kennedy Center for the Performing Arts (Kennedy Center) will honor U2 not only for its platinum-selling albums and classic rock hits like “With or Without You” and “Beautiful Day” but for the group’s unapologetic humanitarian work. León gets her honors thanks to more than 50 years as an influential Pulitzer Prize-winning classical composer and music ambassador.

Each year, the Washington, D.C.-based Kennedy Center honors various artists for their lifetime achievements and contributions to performing arts and entertainment.

The 45th Kennedy Center Honors will take place on Dec. 4.