Confused? Confuddled? TikTok can’t figure out Pink Sauce, but the maker says she sold 700 bottles of it

The online backlash to the personal chef's concoction has been vicious, with questions about ingredients and legality.

A Miami-based personal chef has gone viral for a special sauce that she uses on foods such as french fries and fried chicken because there are questions in the social media sphere about whether it is safe to consume and whether she is producing it legally.

“The world is really curious about my creation,” Chef Pii, 29, said this week in an interview with The Washington Post. “And they’re being malicious.”

Chef Pii, who refused to disclose her real name, said the backlash over her “Pink Sauce” has been vicious. “I’m a normal human being, and I woke up to a million insults.”

According to The Post, online videos of Chef Pii’s pink sauce have racked up millions of views and inquiring minds are peppering here with questions about the ingredients, whether she is operating legally and more.

“Yes, we are following FDA standard,” she said, adding that “we are currently in lab testing, so once we go through lab testing, we will be able to pitch to stores, to put the Pink Sauce in stores.”

Before Chef Pii began producing the sauce on a large scale — she tops fried chicken, french fries and vegetables with it — she used it in her chef business. “I’ve been using it and serving it to my clients for a year — no one has ever gotten sick.” 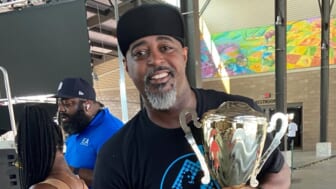 Since July 1, she has sold about 700 bottles of the pink sauce and has had to field a number of complaints. For instance, she apologized to TikTokers who purchased the pink sauce and received damaged bottles. A typo on the initial packaging “mixed up the number of grams of product with the number of servings (444 servings instead of about 30 servings totaling 444 grams).” It would also become necessary for Chef Pii to add “please refrigerate” instructions to the labeling.

@chrissamone Not $20 worth but it literally taste like sweet ranch! 4/10! I have a extra bottle if anyone wants it! #ShowUrGrillSkillz #pinksauce #pinksaucereview #mukbang #viral #trending ♬ Cumbia Buena – Grupo La Cumbia

“This is a small business that is moving really, really fast,” she said in a video posted this week, according to The Post. Chef Pii told the newspaper that the mishaps led her to switch shipping companies. She also apologized to customers who were shipped bottles that were damaged.

Chef Pii said she intends to lower the cost of the pink sauce (currently $20 a bottle) and she dreams of one day partnering with a fast-food company that will serve her product.

Still, on TikTok and Twitter there are questions, observation and criticisms about the sauce, The Post reports. Comments about everything from the chef’s refusal or inability to describe the flavor, conjecture about the use of mayonnaise (that video has 3.9 million views as of Thursday afternoon), its kinship to ranch dressing, to missing ingredients.

Chef Pii refuses to divulge the ingredients in her sauce. “I will not explain my process, and I won’t be bullied into it.”

She did divulge that the sauce’s pink color comes from the red dragon fruit, or pitaya, which has been helpful in treating her past battle with depression.

To be sure, the pink sauce has been a lightning rod, Chef Pii acknowledged. “Yes, the sauce is extremely controversial, but for my curious, artsy people that are actually into the Pink Sauce craze, I love y’all,” Chef Pii said in a video obtained by The Post. “The haters are not taking my light away.”