Ginni Thomas, wife of Justice Clarence Thomas, could be subpoenaed by Jan. 6 committee

If Thomas refuses to cooperate with the committee she could face jail time.

Virginia “Ginni” Thomas, the wife of Supreme Court Justice Clarence Thomas, could be subpoenaed by the House January 6th Select Committee if she refuses to voluntarily testify about her involvement in the attempt to overturn the 2020 presidential election.

As reported by The Guardian, Wyoming Republican Rep. Liz Cheney, vice chair of the committee, told CNN’s Jake Tapper on “State of the Union” that, “The committee is engaged with [Ginni Thomas’s] counsel. We certainly hope that she will agree to come in voluntarily but the committee is fully prepared to contemplate a subpoena if she does not,” she said.

The committee wants to speak to Thomas because she took to Facebook amid the Stop the Steal protests to express explicit support for the violent chaos carried out by supporters of Trump, theGrio previously reported. 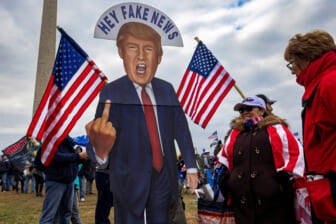 In one post, she shared, “LOVE MAGA people!!!! GOD BLESS EACH OF YOU STANDING UP or PRAYING!” she wrote, as reported by The Washington Post.

According to The New York Times, Thomas serves on the board of Council for National Policy (C.N.P.) Action, an arm of the 400-plus member right-wing activist group, C.N.P. It is C.N.P. Action that urged members to “pressure” GOP lawmakers in three of the swing states — Arizona, Georgia and Pennsylvania — to challenge the 2020 election results. The goal was to keep then-President Donald Trump in power, theGrio perviously reported.

In an interview with the conservative news outlet The Washington Free Beacon, Thomas admitted to appearing at the Stop the Steal rally but said she did not have anything to do with the organizing of the event.

“I played no role with those who were planning and leading the Jan. 6 events,” Thomas told the Beacon. “There are stories in the press suggesting I paid or arranged for buses. I did not. There are other stories saying I mediated feuding factions of leaders for that day. I did not.”

She also noted that she was “disappointed” by the actions of insurrectionists who stormed the Capitol building. 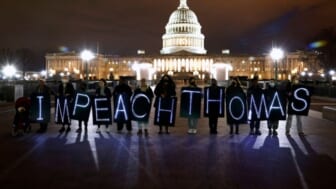 Also Read:
There are 1.2M signatures on a petition to impeach Justice Clarence Thomas

If Thomas refuses to cooperate with the committee she could face jail time like Trump’s former strategist Steve Bannon. Last week, Bannon was convicted of two counts of contempt of Congress after defying the committee’s subpoena, according to Fox 59.

“You can’t ignore a congressional subpoena or you’ll pay the price,” Illinois Rep. Adam Kinzinger, the second of the two Republicans on the committee, told Jonathan Karl on ABC’s “This Week,” Fox 59 reports.