What we did on our summer vacations: The legend of Oak Bluffs

As we reach the peak of the summer heat, theGrio celebrates the legacy of Black summer retreats, including Oak Bluffs on Martha's Vineyard.

If you’ve never visited the Martha’s Vineyard enclave of Oak Bluffs—or Martha’s Vineyard at all, for that matter—you might envision it as immortalized in the 1994 cult-classic film The Inkwell (which, in turn, was set in 1976). Or perhaps you first became familiar with the area as the unapologetically Black and bougie locale of 2011’s Jumping the Broom.

In recent years, the northeast shore of Martha’s Vineyard has appeared in popular culture as the idyllic setting of the artist’s retreat in the second season of the She’s Gotta Have It reboot and the have-and-have-nots melodrama of FOX’s Our Kind of People, largely inspired by the bestselling book of the same name.

“Visiting the Vineyard is a time when I get to spend two weeks with Black folks who are all doing amazing things,” 20-year-old college student and vacationer Raevyn Moore told the New York Times in 2021. But the legend of Oak Bluffs, Massachusetts as a Black summer retreat spans much further than Black excellence as far as the eye can see (though that’s clearly a selling point, to many).

Initially established in 1880 as Cottage City, within 30 years, the town had outgrown its name and was reincorporated in 1907 as Oak Bluffs. While the Vineyard’s first Black occupants were largely domestic workers in the employ of the island’s wealthy white residents and vacationers, Oak Bluffs quickly became an attraction for affluent Black vacationers, often from nearby Boston. Those who flocked there included political and social leaders of the era, as well as athletes and artists.

This was largely due to the influence and efforts of entrepreneurs Charles Shearer, a mixed-race man born into slavery, and his free-born, also mixed-race wife, Henrietta Shearer (née Merchant), who began purchasing properties and establishing businesses on Martha’s Vineyard in the late 1800s. Among their establishments was the now 110-year-old Inn at Shearer Cottage, where their family remains its namesake and proprietors, and which was also dedicated as the first landmark on the African American Heritage Trail of Martha’s Vineyard.

In 1912, the couple expanded their home overlooking Baptist Temple Park. It was at this time that they opened a twelve room seasonal inn, Shearer Cottage…The inn catered to African Americans who, at that time, were not welcome at other island establishments. The Shearers provided lodging, meals, and catered events. The inn thrived. On any given day, the dining room was filled with fifty or more guests, socializing and enjoying meals cooked by members of the Shearer family…the inn remains open to this day, and has been continuously owned and operated by generations of the Shearer family.

Source: The Inn at Shearer Cottage

As Oak Bluffs coalesced around the Black community cultivated by the Shearers, its growth did not go unnoticed by neighboring white communities, which actually gave the area’s popular beach its moniker (and now official name) during the era of segregation.

“Inkwell is a small beach located in Oak Bluffs on Martha’s Vineyard,” explains the Inkwell Beach Swim Guide, noting that in spite of the beach’s popularity for over a century, “The name is pejorative; a name given [by] white beachgoers in Martha’s Vineyard in reference to this strip of beach that was visited by Black residents and tourists.” 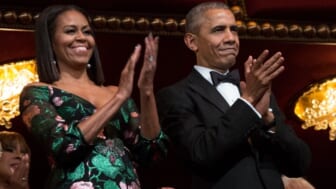 As with other pejoratives, the Inkwell’s name has long since been reclaimed by Oak Bluffs’ still-growing Black populace—a largely monied and highly accomplished populace. In fact, its enduring association with social status has, as noted in a 2009 op-ed here at theGrio, earned the area a reputation as “the epicenter of Black elitism.” In short, it’s complicated; while Black tourism and businesses continue to thrive in Oak Bluffs, so has a perception that only “our kind of people” are welcome.

A recent (and drastic) increase in the cost of local real estate will likely do little to diversify the economy of Oak Bluffs in the near future, but as Zita Cousens, owner of the Cousen Rose Gallery in Oak Bluffs, told the Times: “Black people have always come to the Vineyard. We’ve always been here. The beauty of the Vineyard is the tradition of generations.”

That tradition continues in Summer 2022; this weekend culminates the fifth annual HBCU-focused Legacy Week on the Vineyard, followed by the launch of Black Comedy Month in August. Next weekend, the Martha’s Vineyard African American Film Festival returns for its 20th year, and the Black female-founded Iconoclast Dinner Experience will host “The King Is Dead,” its annual celebration of island-based sustainable agriculture and emerging female culinary and beverage professionals, on Monday, Aug. 8.

Curious about the colorful, creative and complicated legacy of Oak Bluffs? Here are a few histories, articles, and even a bestselling novel to check out, below: