The series airs Tuesday nights on PBS, with the finale set to air next week.

During the past month, “America Outdoors with Baratunde Thurston” has taken viewers on a vast journey across the great United States. Airing weekly on PBS, the series helped fans at home venture into the wilds of Idaho, catch waves with Black surfers in Los Angeles and hike in Appalachia.

Ahead of next week’s finale, TheGrio caught up with Thurston – cultural critic, comedian and best selling – who broke down his experience shooting the series, what he learned about the nation’s disparate landscapes and what traveling taught him about Earth and relationship with climate.

While the series would have come with or without the COVID-19 pandemic forcing everyone inside, it does provide an opportunity for viewers to see the world they could not explore during the last two years.

“The show was conceived of well before the pandemic came and upended all of our lives,” Thurston explained. “We were able to safely make it in the summer of 2021, and now it’s out in summer 2022. It was a great relief, more than it would have been without the COVID situation, a great relief to get outside the walls of my home and also get far beyond where I live to all of these dope places throughout the United States.”

While many shows explore the globe, this series devotion to showcasing the rich and lush environments of the United States makes it unique and impressed Thurston immensely during filming. 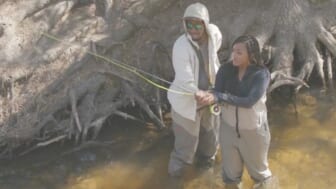 “America is huge, man!” he exclaimed. “It’s a really big country…we are a vast, federated states doing a whole bunch of different things environmentally and, obviously, politically. America is big enough to explore. I still recommend people get out of the country, but there is a lot to see here.”

Thurston’s travels provided physical perks. He quipped, “I got a lot of glute workouts, walking in sand! My thighs got toned making this show, and it wasn’t a part of what I signed up for…the outdoors is a national gym! No monthly fees.”

In the trailer, Thurston states, “We are co-authors with the world around us,” a sentiment that permeates the series. It discusses the importance of climate and understanding the nature around us, especially now as the effects of climate change continue to reveal themselves. “We see a common connection with all of these uncommon folks, with nature, and how we are shaped by the world around us, and the level of community that folks have with the natural world.”

Some people recognized the connections between planet and people earlier than others, Thurston said. “The indigenous communities I got to work with clearly have a much deeper long-standing relationship with nature, referring to salmon as their brothers and trees as their fathers – the idea that we are in a family of life, not just human life. And there are also people who work in the outdoors and depend on it, like the crab men I worked with in Chesapeake Bay…we have neighbors beyond humans. We are shaped by, and shape, our environment. I learned from every shoot and every episode within this series is that it flows both ways: from us but also toward us.”