Tyler Perry said Cicely Tyson only received $6,000 for her leading role in Sounder, which played a factor in his decision to pay her $1 million for his 2007 film.

Tyler Perry was one of Cicely Tyson’s biggest fans, and he made sure she knew it by paying the late Hollywood icon $1 million for a single day of work on his 2007 film “Why Did I Get Married?”

In an interview with AARP The Magazine, Perry revealed it still makes him feel great to know he was able to support such an incredible woman for the last decade of her life.

“I’ve never said this publicly, but I took care of Ms. Tyson for the last 15 years of her life. She was a proud woman, and the only reason I mention this is because she wrote it in her book. This woman had done so many amazing things, but she wasn’t well compensated for it,” he said.

He added: “She made $6,000 for “Sounder,” you know? I wanted to make sure she knew that there were people who valued her. So, she did one day of work on my 2007 film “Why Did I Get Married?” I paid her a million dollars. I loved working with her. And it makes me feel great that I was in a position to give this incredible woman some security in her latter years.”

Perry is known for making sure Black people receive the same opportunities as their white counterparts. In addition to Tyson, Perry has worked with the likes of Angela Bassett, Janet Jackson, Idris Elba, David and Tamela Mann and Taraji P. Henson, who credits him as the first person to pay her what she’s worth. 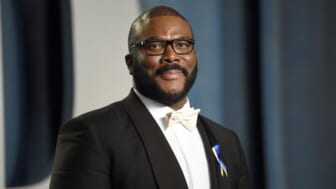 During the interview with AARP, Perry also talked about his relationship with Emmitt Perry Sr., the man who turned out not to be his biological father. Perry said after learning about Perry Sr.’s life, he was able to forgive him for the years of abuse he had endured.

“His childhood was full of abuse. I had an opportunity to either carry that on into another generation or dig it up and cut it at its root. The thing that allows you to get to the root, to really get down in there to pull that up, that’s forgiveness,” he said.

Despite the fact that Perry Sr. isn’t his real father, Perry previously explained he feels financially obligated to provide for him in the same way he himself was cared for – but their relationship doesn’t go beyond that.

The creator and CEO of Atlanta’s Tyler Perry Studios, the first Black-owned television and film studio, said he remains dedicated to producing motion pictures and television shows that are made by and for people of color.

“The land [of the studio] itself was once a Confederate Army base, which meant there were people here fighting to keep my ancestors enslaved. … So, as we built each of the 12 soundstages, we buried Bibles underneath them, as a way of refocusing the spirit of the place,” he told AARP.