The cookbook author revealed in February that she was undergoing IVF treatments.

Chrissy Teigen took to Instagram this week to announce that she and husband John Legend are expecting their fourth child after suffering a miscarriage nearly two years ago.

“​​The last few years have been a blur of emotions to say the least, but joy has filled our home and hearts again,” Teigen, 36, captioned selfie shots of herself showing her baby bump. “1 billion shots later (in the leg lately, as u can see!) we have another on the way.”

In a follow-up post, Teigen joked that it took “44 people” to make the selfie happen, PEOPLE reports.

“Every appointment I’ve said to myself, ‘ok if it’s healthy today I’ll announce’ but then I breathe a sigh of relief to hear a heartbeat and decide I’m just too nervous still,” she added. “I don’t think I’ll ever walk out of an appointment with more excitement than nerves but so far, everything is perfect and beautiful and I’m feeling hopeful and amazing. Ok phew it’s been very hard keeping this in for so long!”

In February, Tiegen disclosed her fertility treatments, writing, “Hiiii. I posted about it in my stories, but I wanted to let you guys know I’m balls deep in another IVF cycle to save as many eggos as I possibly can and hopefully make some strong, healthy embryos,” she wrote in an Instagram post. 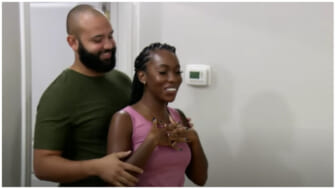 Also Read:
Bri and Vinny from ‘Married at First Sight’ are having a baby

“I honestly don’t mind the shots…they make me feel like a doctor/chemist…but the bloating is a bitch,” Teigen continued. “So I humbly beg you to stop asking if I’m pregnant because while I know it’s said with excited, good intentions, it just kind of sucks to hear because I am the opposite of pregnant!”

The cookbook author opened up to PEOPLE last April about her fertility struggles.

“Coming to terms with not being able to carry again is still really difficult for me because I feel so healthy. I’m like, why?” she said at the time. “But then I think about it as my uterus is just not cooperating with me — and it’s not a failure.”